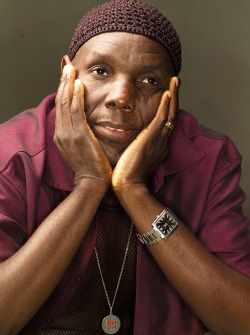 WITHIN the span of Oliver “Tuku” Mtukudzi’s career, Zimbabwe has had no shortage of dramatic events. From colonialism to independence, from civil war to peace and prosperity, from being the breadbasket of the region to incomprehensible hyperinflation. Through it all, there has been much to talk about, and as Tuku believes, if you can talk about it, you can sing about it. His discography confirms this as he is set to release his 61st album Sarawoga in June. The superstar spoke about the album, his work with Zimbabwean youth, and the tragic loss of his son while on tour in the United States.
Question: Your latest album Sarawoga is coming out in North America, but my understanding is you made a film by that name first. What is Sarawoga and what does it mean in regards to the album and the film.
Tuku: Sarawoga means to be left alone, to be left on your own. And Sarawoga the film is based on the same story. It’s personal. It’s my first offering after losing my son in 2010. And some of the pieces of music on this CD are songs I was supposed to do in collaboration with him. So I’m left alone to finish off the songs.

Question: I think to anyone who doesn’t understand Shona, your songs give the impression of being almost light and carefree but there’s often a very serious message underneath them. Why do you choose to use metaphors in your song writing rather than being direct?
Tuku: I don’t know. I think it’s just media who call it metaphors, but it’s not really metaphor. It’s the nature of the language, not a metaphor. It’s how it’s supposed to be spoken. Otherwise if you’re hiding something, the purpose of the song won’t work out.
Question: On Sarawoga, “Deaf Ear” happens to be the only song in English. What was it about, and why did you choose that one in particular to be sung in English?Advertisement

Tuku: I wrote it for the children, and I wrote it for UNICEF. And I wrote the verses in English just to cover more ground directly and get the message especially to parents. I’m saying don’t pay a deaf ear to your children. Listen carefully, there’s always a message, no matter what the communication.
Question: Did I read correctly that this is your 61st album?
Tuku: Yes, yes it is.
Question: That is incredible. How is that even possible?
Tuku: I think as long as there are people, there is always something to talk about. And if there’s something to talk about, there’s something to sing about. So much of passing on messages has something to do with the people. The purpose of song is to give life and hope to the people, to heal the broken heart, to entertain, to educate. There is a lot to talk about.
Question: You founded the Pakare Paye Arts Centre in 2003. What inspired you to open this facility and what sort of activities take place there?
Tuku: It’s all arts disciplines. Music, poetry, drama, sculpture, visual arts, dance. All disciplines. The inspiration came from realizing the problems I felt when I started are still around. Young people don’t have any place to showcase and get appreciated. The problem is attitude. Parents ignore who their children are and impose what they want them to be.
So this place offers somewhere where they can come and do what they do best and get appreciated. We try to help these children identify themselves, which is a duty that should be done by the parents at home at a very tender age. Just check on your son or daughter. What really does she have already, and send the child to school for the right reason, to enhance what she already has?
Question: Because your name is attached to it, does that prestige help in getting these children more respect from their parents?
Tuku: Oh yes. Surprisingly, I did for these youngsters as artists, but parents are also coming to learn how they should handle their children. It’s working.
Question: How often are you back home, and how often are you on tours like this current one?
Tuku: It depends on the bookings. This is the longest tour I’ve ever done. But otherwise, I’m in and out, in and out.
Question: As someone who’s been recording music for an extended period of time, the technology behind that process has changed dramatically. What has been the biggest technological impact to your music making process?
Tuku: The significant change in my life has been quality; quality of the recordings, distribution and so on. Now we’re using better guitars and amps, but the basis of my music still comes from traditional instruments.
Question: Those of us in the West tend to only hear about Zimbabwe’s problems, especially those it was facing five or six years ago. But there’s also a lot of news of things getting substantially better. In many ways, you’re an ambassador of Zimbabwe, almost by default. What are the real problems the country faces today, but more importantly, what is the promise for Zimbabwe’s future?
Tuku: Home is home. Things have changes. Our problem is just to try to improve and maintain our economy. I’m very optimistic. It’s getting better by the day. You can plan your life. In 2007 and 2008 you couldn’t plan because the value of our money would change in hours.
But I don’t think I became an ambassador by default. Being an artist, you automatically become the leader of your culture; you become the reflection of your culture. It was not be default, it was meant to be. In my case, I never decided to become a musician. I never looked for it, it looked for me. I’ve yet to decide what I want to be in life, but I’m doing me.