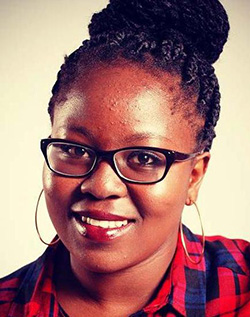 ZODWA Nyoni has moved between Zimbabwe and Leeds since childhood, a journey backwards and forwards that has led to her first full-length play, Boi Boi Is Dead, after a Channel 4 residency at the West Yorkshire Playhouse.
Now a playwright, poet and performer based in Leeds, she first moved to West Yorkshire in 1992 at the age of four when her father gained a scholarship to study for a masters in the textile industry.
“We stayed for three years, went back to Zimbabwe for three years and then came back in 1999 when he was studying for his PhD,” says Zodwa.
We settled in Leeds and by that point Leeds was what we knew because we’d moved back to Zimbabwe when I was so young. So going to Zimbabwe again was like going to a new country. Leeds was home.”
Zodwa’s father teaches at a Zimbabwean university; she is one of seven children, five of them living in Leeds, with two half siblings in Botswana.
“I studied in Leeds and have spent most of my life in Leeds, more than in Zimbabwe,” she says.
After her schooldays at Roundhay School, Zodwa’s talent for poetry took her to New York and then onwards to a performing arts course at Leeds City College.
A degree in art, events and performance at Leeds Metropolitan University was followed by an MA in writing for performance and publication in 2013.
There was also time for a playwriting course in 2010 with Freedom Studios in Bradford, resulting in her first short play, The Povo Die Till Freedom Comes, being staged in Bradford, Halifax and at The Bush in London.
“I realised that what I most wanted to do was write plays, as a natural progression from poetry, especially as I enjoyed studying text more than acting on my foundation course,” says Zodwa.
Subsequently she took part as one of five writers on a Young Writers scheme at the West Yorkshire Playhouse, run by Alex Chisholm in 2010-2011, leading to her piece The Night Shift being performed in the Playhouse rehearsal rooms.
Move forward to 2015, when she builds on the sold-out success of last year’s short play at the Playhouse, Nine Lives, by presenting Boi Boi Is Dead, the story of a dysfunctional family, torn between Africa and England and rent asunder by the death of Boi Boi, Afro-jazz legend, father, lover, playboy, husband, rule breaker and enigmatic force of nature.Advertisement

The play has gone through several drafts, and now the Leeds theatre is giving full voice to her work: testament to the progression of a writing talent with its roots in Zimbabwe and its nurturing in Yorkshire.
“I graduated in December 2013 and started at the Playhouse in January last year,” says Zodwa.
“The university allowed me to be creative and the Playhouse has shown me how the world of theatre works; how you build a show; what it takes to make great theatre.”
Boi Boi Is Dead, a West Yorkshire Playhouse, Tiata Fahodzi and Watford Palace Theatre production, runs at West Yorkshire Playhouse, Leeds, until Saturday
This article was originally published by The York Press