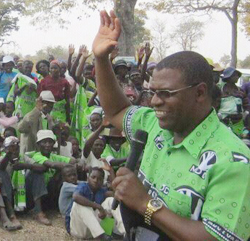 THE MDC led by Welshman Ncube launched its election campaign in Chikomba Central, Mashonaland East Province, last Friday where Ncube defended his alliance with Zapu and United Movement for Democracy and explained reasons behind his non-participation in a grand coalition with MDC-T rival, Morgan Tsvangirai.
Below are excerpts of Ncube’s interview with the Daily News’ Senior Assistant Editor Guthrie Munyuki:
Q: Professor Welshman Ncube you have launched the MDC election campaign here in Chikomba yet your rivals — President Robert Mugabe and Morgan Tsvangirai — had theirs in Harare. Why the rural area for you?
A: We are a party and a coalition for devolution. We believe that the anomalous situation we have had of overly focusing the urban areas neglecting the rural areas where the majority of our people are (must be stopped).
We are a party which believes in devolution, we are a party which believes in empowering local communities, in particular rural communities which have borne the major brunt of underdevelopment and marginalisation in this country.
So we are sending a clear message as to who we represent, who we stand for and who we want to benefit for a future Zimbabwe.
Therefore, it’s not by accident that we are here in Chikomba and it’s not by accident that next week we launch the actual manifesto of the party in Binga.
A rural area, a marginalised area, which also has borne the major brunt of over centralised system of government we had.
That is why we are here and that is why we will be in Binga next week (July 20th).
Q: People are saying you still should have joined Morgan Tsvangirai in a grand coalition instead of an alliance with Zapu and the United Movement for Democracy. Don’t you stand the risk of being labelled a regional party?
A: I don’t see how we, first of all, become a regional party. We are three parties. The leadership of the United Movement for Democracy comes from Mashonaland, the leadership of Zapu, Dumiso Dabengwa, is from Matabeleland South and I am from the Midlands.
So you have three main provinces represented by the leadership at the top level but the rest of the leadership of these parties come from every corner of Zimbabwe.
We are here in Chikomba, the third- highest ranking person in the MDC is the chairman (Goodrich Chimbaira) who comes from here, who is our candidate for (Chikomba Central). The second-highest ranking is the vice president (Edwin Mushoriwa) who hails from Manicaland and resides in Harare.Advertisement

So I cannot possibly see what sort of sense or logic is used to say three parties which come from three different provinces can be labelled regional when the other coalition which is thought to be national has three leaders or supposed leaders, who come from the same province, Manicaland.
How, by what logic, can you say three parties led by three men from Manicaland is a national coalition and three parties led by people coming from three different provinces of the country are regional? I cannot understand it. But what is most important is that we stand for every Zimbabwean. We are canvassing for support in every province.
We have 203 candidates in all the 10 administrative provinces of the country. And we are competitive in each and every one of those provinces.
Let those who think we are a regional party fool themselves, we are not!
Q: There has been so much talk about the differences between you and the other guys who are in the other coalition. What led to the failure to have a grand coalition?
A: First of all there was no attempt to build a grand coalition. You can’t go to the media, newspapers, and announce a coalition or discussions which never took place on the ground. So, one cannot even talk of a failure of something which was never attempted.
There was never such an attempt. We never participated in any meetings or any discussions for a grand coalition. But most importantly, you cannot have a coalition of convenience.
You cannot have a coalition of opportunists. If you are going to have a coalition it must be a coalition of people with some shared values, some shared principles and we simply don’t. The things which divide us are so numerous.
Once a humpty dumpty has broken, its pieces are scattered everywhere, you can’t re-build. And people should stop dreaming that the humpty dumpty, which was the united MDC, can be reconstructed in whatever form.
Some people will not like this but it is the truth.
Q: How deep-seated are these differences?
A: There are so deep-seated that they split the party in 2005. There are so deep-seated that in the last four years the MDC T, instead of focusing on re-building tasks between us they focused on recruiting our MPs, they bribed them. Look at where MaKhumalo (Nomalanga Khumalo) is; look at where the (Abednico) Bhebes are; that was their focus.
Look at how they treated us after our congress. Morgan and his team were saying the leader of the MDC is Arthur Mutambara; there is no other, they will work with him until the courts have determined. And we are saying the courts still have not determined.
So if Mutambara is the leader of the MDC, go and form a coalition with him, I am sure he is willing to do that. After all, he has been in coalition against us for the last two-and-half years. We disagree on just about everything. We, as a party, say there is no situation which can justify the use of violence as an instrument of political organisation.
We believe in collective democratic decision-making processes. I, as the president, cannot overrule the collective decisions either of the Standing Committee, the National Executive or the National Council. And there are so many things.
The only thing which is in common is that once-upon-a-time we were in the same party. We drifted apart and eventually split because we realised that whereas we will say the same things, we will practice different things.
Q: Doesn’t your remaining poles apart militate against what you want to achieve, to have a new dispensation in Zimbabwe?
A: The new dispensation is not a dispensation to remove (Robert) Mugabe. It is a dispensation to build a new Zimbabwe with different values in opposition to the Zanu PF values. And you cannot say let us remove Mugabe under a new dispensation when in fact we are behaving like Mugabe himself.
It doesn’t make any sense to us. And this is the opportunism; this is the coalition of convenience that I talk about.
We must have a coalition of shared values, a coalition of shared principles so that we can, if we successfully win elections, work together. But we cannot work together if we have contradictions.
Q: There are people who say there was reluctance by Welshman to form the grand coalition because he hopes there is a runoff and then he can bargain. Can you explain on this?
A: We have no interest in bargaining. We are being offered through the newspapers to be vice president this and to this ministerial post. If we wanted to bargain and we wanted power that is the shortest route to it. We are saying no; we will not be vice president in a government where we have nothing in common.
We will campaign for ourselves; we will contest in this election for the things we believe in. If the people of Zimbabwe elect us, and we hope they will, we will then form the next government. And if the people of Zimbabwe are not persuaded we are the right people at this particular time, so be it. We will happily go into opposition. We desire no bargaining with anyone, what for?
Q: How do you rate your chances in the forthcoming elections?
A: We have faith in the people. We believe in ourselves. We believe that our chances are as a good as any other candidate. And we have worked more than anybody else in the last two-and-a-half years, since our congress.
There is no village we have not been to and there is no door we have not knocked at over the last two-and-a-half years.
And we believe we have done our homework and we believe victory is ours.