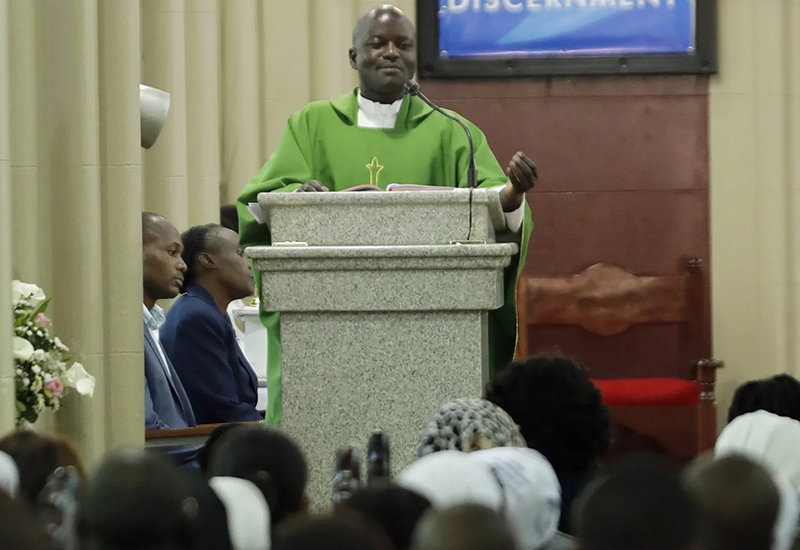 When Zimbabwe’s longtime strongman, Robert Mugabe, was forced out of power five years ago, the country breathed a collective sigh of relief.

Many hoped for a new era of democratic governance and economic prosperity. Yet five years later, the country now faces a deep economic crisis. According to the country’s national statistics body, inflation has reached 268 percent, many times higher than when Mugabe was in power.

The proportion of Zimbweans who have slipped into extreme poverty has almost doubled, from 30 percent in 2017 to 50 percent during the coronavirus pandemic, according to the World Bank.

Meanwhile, most observers say the space for open, democratic debate is shrinking.

Dr. Locardia Shayamunda, spiritual advisor to the Justice and Peace Commission of the Archdiocese of Harare, Zimbabwe’s capital city, now says she is utterly disappointed with the turn of events.

In an exclusive interview with Crux, Shayamunda, speaking in her capacity as a Christian and not necessarily as a Church representative, said there are people who “wish for a return to the Smith time [referring to former Prime Minister Ian Smith, the country’s last white leader when it was still known as Rhodesia] while others to the Mugabe time. “

Following are excerpts of that conversation.

Crux: There were high hopes for Zimbabwe after President Robert Mugabe left power. Five years down the line, how would you describe the general mode in Zimbabwe today?

Shayamunda: Disappointed, let down, hopeless, and a lack of confidence that current leadership has the capacity and willingness to make things better.

Listening to people in the public sphere, some wish for a return to the Smith time while others to the Mugabe time.  There is a general feeling that the situation has deteriorated much more than during Mugabe’s era.

The cost of living has gone up, with majority living from hand to mouth. The gap between the rich and poor has widened, youth are disfranchised and disempowered with no job opportunities, many are voting with their feet [by leaving the country] while the majority has resorted to substance abuse.

This is a lost generation and nothing is done to improve their plight, including children getting exposed to drugs earlier and earlier. Health specialists and analysts say that the country is faced with a public mental health crisis. The crime rate has skyrocketed, with robbers having devised new tactics of attacking their prey.

Despite some improvements road repairs, the country is in fact retrogressing, particularly in the failure to provide adequate electricity. It hasn’t provided a long lasting solution to this problem, despite abundant sunlight which remains untapped to improve electricity provision in the country. The failure by the government to stamp out corruption is also a major cause for concern.

Inflation today is 268 percent, many times higher than it was when Mugabe left office. How does this translate into the way ordinary people live?

The majority are in poverty, while during Mugabe’s time poverty was more pervasive in rural areas. Now, even in urban areas poverty is widespread and pervasive.

Such high inflation means a reduction in buying power of a majority of people. Food, fuel, agricultural inputs prices have skyrocket beyond the reach of many and school fees and hospital fees also.  Many families are struggling to send their children to school and in the event of illness, people struggle to get treatment at public health centers resulting in some resorting to traditional medicines.

Corruption has exacerbated an already difficult situation for the poor, as some school authorities, police, nurses and others demand bribes – what they commonly refer to as “tokens” – in exchange for a preferential treatment. The situation means that the haves can get by while the have-nots truly struggle or are deprived completely of services to which they should rightly have access.

Do you have the feeling that the authorities are serious in the way they are tackling the issues?

Many undertakings and promises are made, but implementation is zero or insufficient, thus questioning the sincerity and seriousness of the leaders in tackling the issues the country is faced with.

What has been the role of international sanctions in the rather difficult situation Zimbabwe finds itself in today, and how much blame do you think the government shares?

While sanctions are purported to target individuals in Zimbabwe,  to a certain extent these have had a negative impact on the ordinary person. For example, bilateral cooperation with the government of Zimbabwe was cancelled by many countries in the North which not only impacts negatively on the government but the country at large. Targeted individuals, while deprived of entry to certain countries and access to money in their offshore accounts, have not been deterred from violating peoples’ rights.

It is therefore the poor ordinary people at the receiving end who continue to suffer. With the government’s ‘Look East’ policy, the few political elite still travel to the east (China, for example) for treatment and business engagements, ignoring those who would have imposed sanctions on them.  The aim or goal of the sanctions, to say the least, has not been achieved, and l wonder whether this is the best way.

The government continues to deny blame and has since mobilized the Southern African Development Community (SADC) to rally behind them for a push to remove the sanctions.

The incoming Zimbabwe Catholic Bishops Conference (ZCBC) secretary general, Father Tryvis Moyo, has committed to facilitating “meaningful dialogue” between the church and state. Just what role do you think the Church can play, or has been playing to improve life for the people of Zimbabwe?

The church has in the past facilitated dialogue between the ruling and opposition parties and also engaging at individual level some politicians. This is commendable, but the church can do more.

It is high time the church must identify, train and groom future leaders. Once deployed into leadership positions, the church can continue to offer support to such leaders while at the same time holding them to account in terms of abiding by church principles, beliefs and values which most political leaders tend to move away from once in positions of power.

Constant reminders that this is a kairos moment for them to make a change and leave a mark will keep them on track of what is expected of them and what they must do to realize that.

Dialoguing with politicians in Zimbabwe is critical, and his [Moyo’s] promise to commit to facilitate “meaningful dialogue” between the church and the state is highly commendable –probably joining hands with other church bodies, at the level of the Zimbabwe Heads of Christian Denominations (ZHOCD), will give a stronger voice and force from the church side.