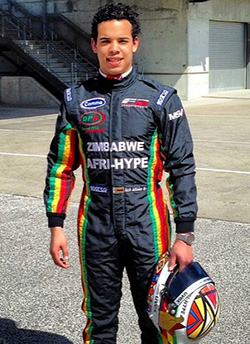 AXCIL Jefferies is a Zimbabwean racing driver looking to break into Formula One. VAVEL’s Aaron Irwin managed to get an interview with Axcil and asked him all about his racing career so far, his upbringing in Zimbabwe, and his future aspirations.
AI: Hi Axcil! Firstly, how much support did you get from your family when you started your motorsport career?
AJ: Honestly I would not have started racing had it not been for the support I received from my family. I have come from very humble beginnings and am extremely grateful that my parents believed in me and my dreams and have fully supported me on the journey!
Did you have any sporting heroes growing up? Someone you looked up to?
Of course growing up there were many athletes/ drivers and older peers that i looked up to. In motorsport I would have to say it was Michael Schumacher until Lewis Hamilton came onto the scene. I felt he had gone through very similar challenges that i had to deal with, and he overcame them and realised his dream. Without a doubt the fact that he is such a nice guy out of the car has made me continue to look up to and seek advice from.

Do you intend to get into Formula One? If so, which team would you love to drive for?
Formula 1 is definitely the goal for myself and my family! Formula 1 is sold as a World Championship yet it fails to have a driver or event from the African continent. I would love to change that! It would have to be Ferrari. The brand has so much history and prestige… One day I would hope to add my name to the greats that drove and won for Ferrari in Formula 1.
How different was racing in Europe compared to when you raced in Zimbabwe?
The racing in Europe was obviously a lot more professional. Karting in Zimbabwe is traditionally father-son teams, so it was a bit of a shock rocking up to our first event and competing against what looked like mini Formula 1 teams. It took a bit of time to get used to the level of aggression, but I’m proud to say that it wasn’t long till we were pulled into a factory team and became a Championship contender. Advertisement

What were your thoughts on Jules Bianchi’s horrible accident at Suzuka? Do you think something needs to change for F1 to be safer?
Obviously that was a very unfortunate accident and a harsh reminder of how dangerous motorsport still is. I know the FIA are constantly working to improve the standards of safety for the drivers, marshals, team members and fans.. Unfortunately that was just one of those freak accidents that we hope to never see again. Our Prayers are with Jules and the Bianchi family at this difficult time.
Do you have a favourite track? Spa? Monaco? And if so, have you ever raced at it?
There are a few circuits i really like. I’m a big fan of Monza. It may not be the most challenging circuit for the drivers, but the historic feel is something else! I also quite like Brands Hatch GP circuit and Sentul in Indonesia (Mainly cause I was really fast there!).
How did it feel making your GP2 Debut this season? Knowing you’re getting closer to Formula One?
It almost felt surreal even being in GP2. I haven’t been fortunate to have a consistent career, so to reach the level of GP2, racing on the same weekend as Formula 1 with almost the same power/ speed was awesome!! We got there through hard work, determination and never letting go of our dreams. It reminded me that anything is possible if you are willing to put everything on the line for it and believe in yourself! Now the focus is to do a good job and hopefully impress the right people in the Formula 1 paddock.
It’s my understanding you’re a UN AIDS ambassador, please tell me more about your goodwill work?
Yes. This year I was appointed as a UN AIDS Global Goodwill Sporting Ambassador. I competed in a couple of events in America with the UN Aids livery on my car/ overalls and raised awareness for the campaign #protectthegoal which was focused on Zero new HIV Infection, Zero new Aids related deaths and Zero discrimination. I am extremely humbled to continue my association with the UN. Additionally i am also a Child Line Goodwill Ambassador and FIA Action for Road Safety Ambassador.
That sounds incredible! Finally, what are your plans for 2015? Do you intend to remain in GP2?
For sure, the plan is to do GP2 in 2015. That is where we need to be to assure we reach our goal of Formula 1!
Factfile
Born – 14 April 1994
Nationality – Zimbabwe
Race Series Contested In – Karting (2007-2008), Formula BMW Europe (2009), Formula BMW Pacific (2009-2010), Formula Two (2012), Indy Lights (2013-2014), GP2 (2014)
Highlights – 2009 Formula BMW Pacific (3rd In Championship)
UN AIDS Goodwill Ambassador