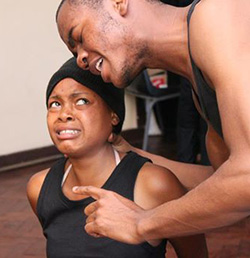 INTWASA Arts Festival KoBulawayo is set to introduce, for the first time this year, a fringe three-day mini festival dubbed Intwasa Extra that will feature some of the popular shows showcased in September.
This year’s edition of the spring festival ran from September 23 to 27, under the theme, Unforgettable, and Intwasa Extra is set to run from November 20 to 22 at the Bulawayo Theatre.
The fringe festival will feature the popular historical theatre play, Mbiko kaMadlenya, Comedy Night and a new theatre production, The Taking.
Festival Director, Raisedon Baya said the Extra will usher Bulawayo residents into the festive mood.
Mbiko kaMadlenya is a story of a local hero turned villain. It takes its title from its antagonist Mbiko kaMadlenya. After Mzilikazi’s death the Ndebele state is thrown into a leadership crisis as the fate of Nkulumane, the heir apparent remains a mystery. It is the succession issue that nearly cracks the foundation of the state.
The language of the play is powerful and mind-blowing. Although the play is done in English (to appeal to a wider audience) the language taps from Ndebele idioms, proverbs and symbols. The story line is simple and fluid. The praise poetry and chants completes it as a true traditional production.
The play was adapted from Mayford Sibanda’s classic Ndebele novel of the same name by Thabani H. Moyo. It was directed by Nelson Mapako and choreographed by Richard Ndlovu.
And, after a successful run during Intwasa 2014, the comedy night bounces back with more comedians added to the line-up.
Bulawayo based comedian Clive Chigubhu returns to the stage after a three months absence due to illness.
He is joined by Harare based comedian Q the Boss who did not feature at the festival. Babongile Skhonjwa and Ntando Van Moyo will also be on hand to hand out a strong dose of local comedy.
The Taking which will premiere at the fringe festival focuses on the controversial land issue and will take one back into history – to colonisation, liberation, and the land issue – land as a national treasure and heritage and also as a source of conflict.

Using vivid imagery and clever storytelling the play questions the role and place of storytellers and their stories in present day Zimbabwe. The Taking, takes no sides but seeks to remind us of where we come from and who we are as Zimbabweans.Advertisement

In this new play a storyteller is arrested for performing folktales without a censorship or clearance certificate from relevant authorities. During the same week a young farm labourer/maid is also arrested on suspicions of murdering the old white farmer who had adopted her while she was young. Their stories connect as the play gathers momentum.
“Theatre is an institution that deals with memory,” said the playwright Raisedon Baya.
“With The Taking the idea is to take our audiences back to those chaotic years and make them remember.
“Theatre is a bank where we should keep our very important national narratives and then, once in a while, take them out for everyone to remember who we are and where we come from.
“The Taking is also universal in that it is about survival and identity.”
The play features the talents of Gift Chakuvinga, Zenzo Nyathi, Elton Sibanda, Aleck Zulu and Musa Sibanda.