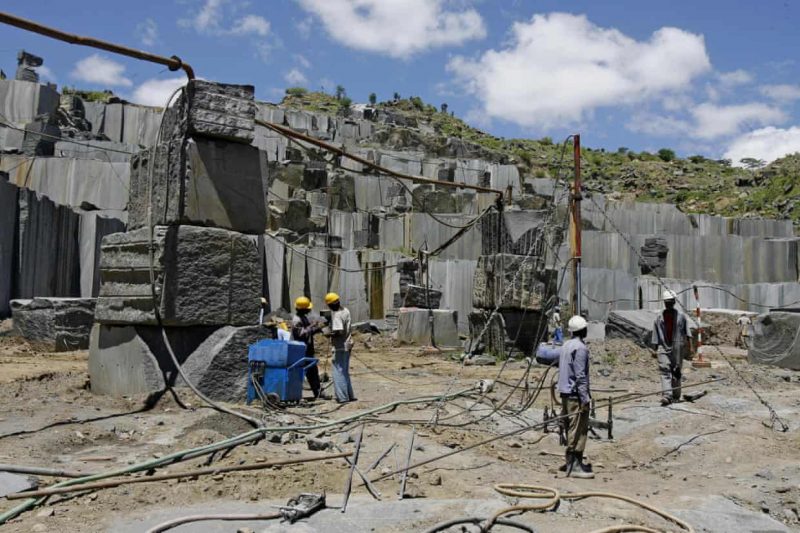 A recent story published by The Guardian alleged that Chinese companies involved in granite mining in Zimbabwe have aroused fear and upset among local people.

The article, titled “They want to remove us and take the rock, say Zimbabweans living near Chinese-owned mines,” claimed that Chinese mining companies in Mutoko District, Mashonaland East Province, are unjustly displacing villagers to pave the way for their mining operations.

However, a Xinhua investigation on the ground showed a different picture from the one painted by The Guardian.

The story alleged that 50 families in Nyamakope village in Mutoko District have been told by a Chinese mining company that they will have to leave their homes and land.

In contrast, only three families in Nyamakope have so far been moved by Jinding Mining Zimbabwe, a Chinese granite mining company based in the area, said Salison Ranjisi, an 82-year-old man, who is among the relocated families.

Ranjisi, who was described by The Guardian as “collapsed when he heard the news” that he would be relocated, said he never fainted, but suffered from high blood pressure after the relocation process while his new house was being built.

“People lied that I fainted. It’s not true. They didn’t tell the truth,” Ranjisi said.

Furthermore, the Guardian story alleged that the families “were given 2,500 U.S. dollars to rebuild their homes.”

Ranjisi emphasized he moved after signing a contract and receiving a compensation worth 4,800 dollars, and that there was no one forcing him to leave.

Another Chinese mining company that was mentioned in the story, Shanghai Haoyun, was wrongfully written as “Shanghau Haoying” Mining Investments.

“They even spelled wrongly our company name. We are currently undertaking exploration works required before the commencement of mining operations, let alone the relocation of villagers,” according to a statement from Shanghai Haoyun.

Robert Mavhuta, a local councilor for Ward 10 in Zisengwe-Nemagunde village, Mutoko District, said no family in his ward has been relocated by Shanghai Haoyun, which has been granted mining rights in his area.

“In case there is any family which is to be displaced, we will sit down and talk, and they (the families) will be compensated accordingly and justly,” he told Xinhua, adding the procedures of relocating local people will be fair.

Citing mineworkers, the Guardian story also indicated labor malpractices by the Chinese companies, including long working shifts and low pay, which have been proven untrue.

Blessmore Karimazondo, a front-end loader operator, has been working in Jinding for the past two years.

Karimazondo said he works eight hours a day and the salary is good for him, given that the inflation rate is high in the country.

Before Chinese investments came to Mutoko, the black granite was an unexploited resource with no economic value, said Robert Machinga, a local villager and a junior rig operator at Shanghai Haoyun.

Known as the Zimbabwean marble, the stone is perfect for cladding buildings and decorating kitchens and bathrooms.

“We used to see these stones and we had no idea that these stones are wealth, but with the coming of Chinese investors who brought jobs, we can see that our lives are changing,” he said.

The Chinese mining companies have also benefitted local communities through their skills transfer initiatives, he said.

“I gained skills to operate machinery. Many people can now fend for their families, unlike previously when you would wake up and spend the day sitting at home. So many things have changed,” he added.

With more Chinese mining companies moving into the area, the livelihoods of the villagers will greatly improve, Machinga said.

In fact, Chinese companies in Zimbabwe have created numerous jobs and contributed a lot to the local economy. Across the country, they have built roads, bridges, borehole wells and schools.

In 2020, bilateral trade between China and Zimbabwe reached 1.399 billion dollars, up 4.2 percent year-on-year, according to figures from China’s Ministry of Commerce.

“Chinese companies welcome competition, but not malicious smear. Let’s compete for the title of the top contributor to the Zimbabwean economy and the wellbeing of Zimbabwean people,” said Guo Shaochun, Chinese ambassador to Zimbabwe.

The Western countries want China out of Zimbabwe and its lucrative natural resources sector in order to push Zimbabwe into a development trap, Zimbabwe’s largest daily newspaper The Herald pointed out in an editorial in response to the Guardian story, adding that the anti-China rhetoric in Western press aims to tarnish relations between Zimbabwe and China.

“Out of sheer jealousy, envy and pique, Western countries have begun a spirited campaign against Chinese investments in Zimbabwe using a phalanx of corrupt media, paid activists and civil society organizations,” it said.

According to an investigation conducted by The Herald last year, local journalists were allegedly paid to peddle lies and sensationalize issues by portraying Chinese businesses as unethical, reckless, criminal and causing harm to communities, the environment and workers.

The journalists were allegedly offered 1,000 dollars for each anti-Chinese enterprise story they wrote.

In response to a latest defamation report on Chinese investment by a number of civic society groups in Zimbabwe published on Jan. 20, Christopher Mutsvangwa, the ruling ZANU-PF’s Politburo member and secretary for information and publicity, said all investments are welcome in Zimbabwe regardless of their origins.

Zimbabwe continues to “welcome and receive investments from across the world and our all-weather friend China, at a time when others are investing sanctions and hostility” to a resilient but hospitable people of Zimbabwe, Mutsvangwa was quoted by State-run Sunday Mail Newspaper as saying.

In the wake of increasing rhetoric against Chinese investments, Zimbabwean President Emmerson Mnangagwa has said again and again that investments from the Asian country are most welcome.

Commenting on the story by The Guardian, Rangarirai Shoko, editor-in-chief of New Zimbabwe Inter-Africa News Agency, said Western media have lost their predominant positions that they held in the world with the publication of lies.

“I don’t worry much about the Western media anymore. They do a good job of discrediting themselves and killing themselves,” he said.