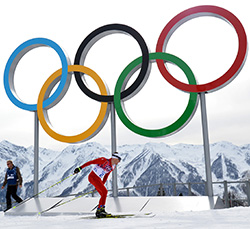 LAUSANNE: Russian athletes will be allowed to stand on the medal podium at the Winter Olympics — just not with their anthem playing or their nation’s flag rising above them.
The International Olympic Committee barred Russia and its sports leaders from the upcoming games in South Korea after its lead investigator concluded members of the Russian government concocted a doping scheme at the 2014 Sochi Games that “caused unprecedented damage to Olympism and to sports.”
Not welcome in Pyeongchang next year will be any sign of the Russian Olympic Committee or any member of its sports ministry, which was responsible for what investigators concluded was a top-to-bottom scheme of “manipulation and cheating” to ensure Russians could dope at the Olympics on their home turf and not get caught.
The IOC punishment did leave room for many Russians to compete under the name “Olympic Athlete from Russia” or OAR. They would have to pass drug tests to prove they were clean and also did not benefit from the Sochi scheme.
If they win, the Olympic flag would be raised and the Olympic anthem played to honor their victories. That is, if Russian President Vladimir Putin allows them to go to the Feb. 9-25 games. He previously has said it would be humiliating for Russia to compete without its national symbols.
“An Olympic boycott has never achieved anything,” IOC President Thomas Bach said at a news conference. “Secondly, I don’t see any reason for a boycott by the Russian athletes because we allow the clean athletes there to participate.”
Alexander Zhukov, the Russian Olympic Committee president who also was suspended from his IOC membership, told TV reporters in Lausanne that one key was preserving the name “Russia” in the team name.
“They’ll be called Russian athletes and not some kind of neutrals … that’s very important,” Zhukov said.