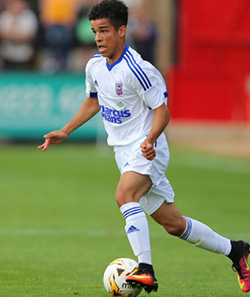 UK: FORMER Colchester schoolboy Tristan Nydam is being tipped to make his Ipswich Town debut.
Blues legend Kieron Dyer has been impressed with the midfielder and expects him to feature before the end of the season.
Zimbabwe-born Nydam, a former student at Colchester’s St Benedict’s Catholic College, was on the bench for the first time for a competitive game at Huddersfield Town last Saturday.
He previously came on as a substitute for the senior side in their pre-season friendly at Cambridge United.
And Dyer is a big fan of the first-year scholar, who he has kept a close eye on as he has progressed through the academy.
“Tristan will definitely make his debut before the end of the season,” said Dyer, who also played for Newcastle United.
“He’s been injured all over Christmas, so I was surprised to see him on the bench because I don’t think he’s had much training or football.
“He’s an all-action player and a completely different player to (fellow Town starlet) Andre Dozzell.
“Whereas Andre is more of a creator when he gets on the ball, Tristan is up and down the pitch, has an engine, is fast, strong, can tackle and pass.
“I always joke and call him ‘Tristan Dyer’, because he’s quick and he’s got an engine.
“He can run all day and he’s definitely one to watch out for.
“He’s a humble boy and the way he plays is the way he trains, giving 110 per cent. He has a great attitude.
“(Manager) Mick (McCarthy) was probably never going to bring him on at Huddersfield because we were losing and the team are so fragile at the moment, but hopefully once we’re safe and there are a few games left before the end of the season, I definitely think Mick will give him a go.”
Nydam, 17, was on standby for the England under-17s ahead of last summer’s European Championships and he signed a professional deal at Portman Road in November.Advertisement