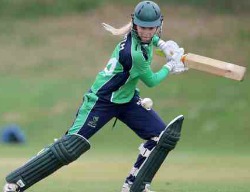 KIM GARTH superb all-round display helped Ireland to an emphatic 119 run win over Zimbabwe in their crucial World Cup Qualifier opener in Colombo.
The Pembroke star top scored for the Irish with 63 as they posted a commanding 237 for 6 in their 50 overs.
She received good support from skipper Laura Delany who made 47 – her best score for the Girls in Green as the pair added 94 for the 3rd wicket.
The Irish timed their innings perfectly as they accelerated in the final stages, adding 101 in the last 13 overs as the Zimbabweans toiked in the sauna-like conditions.
Clare Shillington hit a breezy 30 from just 20 balls (4 fours, 1 six) as her and Garth added 52 in just 34 balls.
Mary Waldron (18*) and teenager Gaby Lewis (13*) kept the momentum going in their unbroken 7th wicket stand of 36 from only 22 balls.
Leinster’s Amy Kenealy celebrated her 50th cap by taking two early wickets as Ireland kept a firm grip on the game.
The Hills’ leg-spinner Ciara Metcalfe and Garth both picked up three wickets as Zimbabwe slumped from 58 for 2 to 118 all out, losing 8 wickets for 60 runs.
Robyn Lewis (2-7) was the other successful bowler for the Irish in a clinical all-round display which sets them up for Super Six qualification and the continued ODI status that goes with it.
Ireland are back in action on Wednesday when they face hosts Sri Lanka – who were beaten today by tournament favourites India. Bangladesh and South Africa beat PNG and Pakistan in the other games.
ICC Womens’s World Cup Qualifier, Colombo
Ireland 237/6 (50 overs; K Garth 63, L Delany 47, C Shillington 30, C Joyce 26, J Nkomo 2-46, N Mutasa 2-53)
Zimbabwe 118 all out (37.5 overs; A Noiraya 35, L Tshuma 25, M Musonda 20, K Garth 3-24, C Metcalfe 3-38, R Lewis 2-7, A Kenealy 2-19).
Ireland Women won by 119 runs.Advertisement