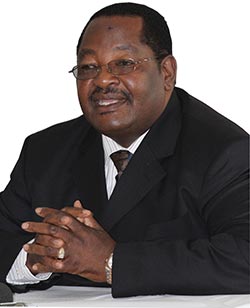 ANYONE coming from Mars might be tempted to believe Transport and Infrastructural Development Minister Obert Mpofu is serious about fighting corruption after he sacked the Air Zimbabwe board on the eve of the arrest of the airline’s bosses last week. For good measure, he also sent packing the directors of the other state entities that fall under the aegis of his cabinet portfolio, including the Civil Aviation Authority of Zimbabwe, the National Railways of Zimbabwe and the Zimbabwe National Roads Administration.
After all, this move was always going to find resonance with the public wrath currently sweeping across the country and beyond over the looting of state-run concerns like the Zimbabwe Broadcasting Corporation and the Public Service Medical Aid Society, including by senior officials who have been pocketing insanely colossal figures in salaries. Yet I couldn’t help noticing what appears to be his astounding hypocrisy, not least because any attempt by anyone in President Robert Mugabe’s administration to rid government corridors of corruption is always dismissed as a ruse for political mileage.
Mpofu reportedly dissolved the national carrier’s board for allegedly leaking to the press a forensic audit report that apparently led to the arrest of the beleaguered airline’s company secretary Grace Pfumbidzayi as well as acting chief executive officer Innocent Mavhunga and his predecessor Peter Chikumba.
According to Newsday, the minister was miffed at learning “a lot about developments at Air Zimbabwe” from the media instead of getting it directly from the board. “I received the forensic audit report yesterday (Monday) where upon reading it I realised most of the issues have been reported verbatim by papers,” the daily newspaper quoted Mpofu as saying last week. “It shows the board’s total lack of appreciation that there is an authority or sheer lack of corporate governance.”
I hope the minister did not – as is sadly the norm in the top government offices – have the report rotting on his desk for months. Still, even if he had seen the forensic audit report in question as soon as it was completed, was the outcome of the investigation going to be any different? For all we know, the report could still have been leaked from his own office. Granted, almost all parastatals are in a parlous state, yet, for all its limitations, the recently sacked Air Zimbabwe board appeared to a considerable degree interested in accountability if one can take seriously its decision to institute the forensic audit investigation that exposed the extent of the rot at the flagship carrier.Advertisement

Mpofu knows too well discouraging transparency can only be anathema to the tenets of the government’s own economic blueprint, the Zimbabwe Agenda for Sustainable Socio-Economic Transformation (Zim Asset), which expects all public sector agencies to combat corruption and foster good governance. To achieve accountability and transparency, public sector agencies are expected to, among other things, improve their citizen satisfaction indices as well as their resource allocative efficiency.
Media reports over the past year talking about, for example, Air Zimbabwe resuming flights and a bloated workforce being whittled down seemed to suggest the carrier was trudging on the Zim Asset track albeit at a frustratingly slow pace which I guess can only be looked at in the context of the country’s economic malaise. Probably Mpofu will tell us – when the time is right for him – the real reason he dissolved the boards, never mind that almost all of them were useless or in a moribund state.
One can only expect the minister – if he wants us to believe his new-found verve to bust corruption and cultivate good governance is genuine – to be transparent in the manner in which he will appoint the replacement boards. I am sure he is aware long-suffering Zimbabweans have always been concerned about the tendency of cabinet ministers to put their own connections in charge of state companies falling under their portfolios to either safeguard their interests or facilitate looting.
While at it, in the interest of the same transparency and accountability he expects from the parastatals he oversees, Mpofu should explain his role in the alleged plunder of Marange, the diamond fields widely seen as our country’s salvation. If he is indeed genuine about fighting corruption, it’s a pity he is no longer in charge of parastatals like the Zimbabwe Mining Development Corporation and the Minerals Marketing Corporation of Zimbabwe that are at the centre of the diamond scandals.
It’s disturbing that Zimbabwe’s post-independence era is characterised by a political leadership that has consistently failed to provide the best examples for accountability, transparency and integrity. And whenever token efforts are made to rein in greed and corruption, the ordinary citizens always see through the not-so-hidden motives, in most cases to gain cheap political mileage or to side-line opponents.
Right now, any exposure of corruption linked to a big political figure is likely to be interpreted in the context of the divisive battle within Zanu PF to succeed President Mugabe as both party and state leader. And whenever these issues are politicised, the focus is always unfortunately diverted from the suspected culprits – whether they are small fish or sacrificial lambs.
We shouldn’t care whether officials implicated in corruption scandals are linked to Emmerson Mnangagwa or Joice Mujuru, the two senior Zanu PF officials believed to be fighting to succeed Mugabe. If anyone is suspected of theft or any crime, they should have their day in court, regardless of the political faction they belong to. Even if they are concubines, relatives or friends of the powerful!
Zimbabweans – who haven’t forgotten nothing happened to those implicated in, for example, the Marange, Ziscosteel, Zupco and VIP housing scandals – will only start believing the government’s efforts are genuine when cabinet ministers and other senior state and political figures come clean and declare their wealth and its source first. And, of course, they must stop shielding their cronies suspected of ransacking public coffers. Otherwise what we are seeing at the moment is just taking us for fools.
Fredrick Matenga is a concerned Zimbabwean based in London.