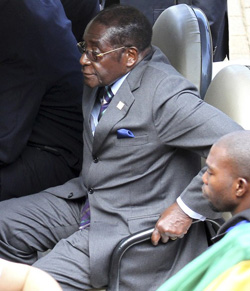 IT is hard to imagine that President Robert Mugabe will seriously want to or could seek re-election in 2018 after watching him – a frail old man who will be 93 early next year – at his party’s youth league assembly in Harare recently.
His speech at the Saturday rally, both on and off script, came out painfully slowly and he spoke much of it with his eyes closed.
Perhaps, as some speculated, he was tired as he had returned home early that morning after a hectic ten days with business trips to Kenya, Swaziland and a three-day private visit to the United Arab Emirates.
He had interrupted his stay in Swaziland at the summit of the Southern African Development Community, returned home a day earlier then he planned, and took the long haul Air Zimbabwe plane later that night to Dubai. Three days later he made a night flight back to Harare.
Mugabe made jokes about his health and rumours that he had died as he shook hands with most members of the cabinet who usually go to Harare International Airport when he leaves the country and when he returns. Mugabe travels out of Zimbabwe every few weeks.
Many say even if Mugabe’s extreme frailty on Saturday was only temporary, it is impossible to imagine him on the campaign trail again in mid-2018.
At the last elections, three years ago, he spoke forcefully, often deviating from his script at several packed rallies ahead of the polls, and was still able to move around freely when he promised voters two million jobs and a revived economy. He had recovered from ill health in 2009, when he first went to Singapore for medical treatment.
Nowadays, despite extraordinary health for his age, Mugabe cannot move about freely. He is uncertain on his feet, and he speaks ever more slowly. He can read again since he had cataract operations in Singapore in 2011 and a second one in 2014.
Reading from his script on Saturday, Mugabe attacked judges of the High Court for granting permission to a coalition of opposition parties which was granted permission to march through Harare to press for reform of electoral laws.
Mugabe is angry with the courts. “They dare not be negligent in their decisions when requests are made by people who want to demonstrate, to hold these demonstrations,” he told the Zanu PF youth assembly. Speaking slowly, and with his eyes closed, Mugabe said: “In light of the violence that we had earlier on, surely they should have taken note that when permission was given four days ago, there was violence; when it was given two days ago, there was violence.Advertisement

“To give permission again when they (judges) are in full knowledge that it is going to be violent or (there is a) probability that there is going to be violence is to pay reckless disregard to the peace of this country. We hope now they have learnt a lesson.”
Before the Harare High Court granted permission for the demonstration, police tear gassed a small gathering of opposition supporters in an open field on the western edge of the city. Protestors were not arrested when they put barricades in the streets nearby.
There was some looting in a crowded city centre street, packed full of informal shops later in the day. About 100 people were arrested from different parts of the city and three quarters of them were denied bail over five court days last week. About 15 of those arrested claim they were beaten up in the Zanu-PF headquarters later in the day.
Mugabe was due to lead cabinet on Tuesday. Insiders say he will go to New York ahead of the the UN General Assembly on September 13, and on this trip he is likely to be accompanied by first lady Grace Mugabe, who at present is reportedly still in Dubai. Their eldest son, Robert, studies there.
If Mugabe retired or died in office, the present senior vice president, Emmerson Mnangagwa, would take over the presidency for 90 days. Then the ruling Zanu PF would have to hold an internal election to appoint a new first secretary, who in turn would become the next president.
Some Zimbabwe domestic media say there is intense jockeying for position between two factions in the party, those who support Mnangagwa, and those who support a faction around Grace Mugabe and Zanu PF political commissar, Saviour Kasukuwere, who is also home affairs minister.
Mnangagwa has been at Mugabe’s side for more then 50 years and was put out when in 2004, the Zanu-PF constitution was changed to ensure that one of the two vice presidents was a woman.
Joice Mujuru, in the cabinet since 1980 independence won the post. She remained there until she was sacked from the position ahead of the Zanu PF 2014 congress. Subsequently she was expelled from Zanu PF and now runs her own political party. Zimbabwe First.
Mnangagwa has denied there is any jockeying for positions within Zanu PF. Many in the business community say, provided they are not quoted, they hope he succeeds Mugabe.
“it can’t come quick enough,” said the executive director of one of Zimbabwe’s largest industrial companies: “We know it won’t be a liberal democracy, but it will be a whole lot better then now because he knows what is wrong with the economy.”
Zimbabwe has to raise about US$1,8 bn to service debts at the World Bank, International Monetary Fund and African Development Bank so that it can borrow more to repair infrastructure. So far, no one is sure where this money will come from.
Zimbabwe has now limited imports, particularly from South Africa, to boost local production. There is a critical shortage of US dollar notes at all commercial banks in Harare. Zimbabwe abandoned its currency in 2009 after hyper- inflation made it worthless.
It is not clear whether Mugabe paid for his trip to Dubai last week, or whether funds for the Air Zimbabwe 767 and crew came out of the presidential budget.