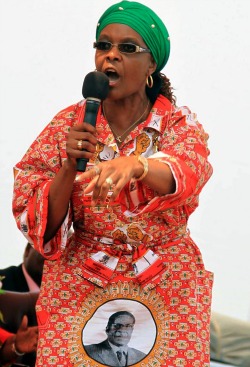 ZIMBABWE has been in a political quagmire for a long time now. Its conflict gyrated around land and the intimidation of the opposition, among others.
However, it recently took another turn so as to gain tractions after president Robert Mugabe fired his vice president Emerson Mnangagwa for what the Simon Moyo, the minister of information said was disloyalty and ineptness.
He was quoted as saying that “the vice president has consistently and persistently exhibited traits of disloyalty, disrespect, deceitfulness and unreliability.”
Demonstrably, Mnangagwa was fired long time ago when Mugabe’s wife, Grace, the power behind the throne, started attacking him openly in her race for power.
She was once quoted as saying “I’m the First Lady and Mnangagwa was employed by my husband. Why would I kill him?” Mrs. Mugabe added. “I am the boss” as she was responding to allegations that she wanted Mnangagwa eliminated due to avert a peril to her ruse to inherit or snatch power from her elderly husband.
This was after Mnangagwa was quoted as saying “the medical doctors who attended to me ruled out food poisoning but confirmed that indeed poisoning had occurred and investigations were in progress.”
Due to the crookedness and spookiness of power race, the issue was not whether Mnangagwa would be shown the door or not. Instead, it was when and how.
For, a day before firing Mnangagwa, Mugabe was quoted as saying “I am told off daily in the name of Mnangagwa. Did I make a mistake by appointing Mnangagwa as my deputy? If I did, then I can remove him, even tomorrow.” And it came to pass. Mnangagwa was fired the next day.
As if Mrs. Mugabe was preempting what was to come through a choreographed scheme, on the same day Mnangagwa was fired, Kudzai Chipanga, ZANU-PF youth league leader was quoted as saying “the only person possessing such qualities is … the first lady.”
Like any desperado-cum-schemer gagging for power, Mrs. Mugabe isn’t new to edging out those she sees as potential contestants for power shall her husband pass on. Before, former vice president Joyce Mujuru faced the same fate. She was purged unceremoniously after proving that she was suitable for the office.
Thus, preventing Grace from taking advantage of her husband who is a bit long in tooth for running the country. Thanks to nepotism, corruption, abuse of power, bedroom politics and politics of the tummy, even the husband eggs the first lady on to see to it shall anything happen, she must ascend to the throne.     Advertisement

Africa isn’t new to such bedroom politics.  Just last year, in Uganda, President Yoweri Museveni did the seemingly impossible. He appointed his wife Janet minister for education in his government; and everything seemed normal.
Former Malawi president Bingu wa Mutharika once appointed his widow Calista minister of Safe Motherhood despite the ministry having such ridiculous, name nothing was viewed by courtiers as spooky as it was.
In the neighbouring Zambia former president Michael Sata appointed his wife’s sister Mariam Mwape Mulenga ambassador to Turkey. Away from Africa, Azerbaijan’s President, Ilham Aliyev appointed his wife-Mehriban as the first Vice President in Feb., this year.
Looking at the CVs of all three presidents, you find that they have a college degree or degrees for Mugabe and Mutharika. To the contrary, their wives don’t have any. Again, you wonder how such semi-illiterate ladies are able to coerce and manipulate their educated hubbies. This, once again, speaks of the canard in African education so as to need to be decolonised.
Apart from some first ladies forming the part of their husbands’ governments, in some countries, they are treated like the presidents simply because they share bed with African big men in power.
In Tanzania, the wife of the current president John Magufuli, Janet is referred to as “our mother” as if she is Virgin Mary or the wife of the father of the nation Mwl Julius Nyerere.
All this is done, especially by courtiers and bootlickers in order to entice her and show how she is the force to reckon with vis-à-vis bedroom politics. The wife of former president Jakaya Kikwete, Salma was recently appointed an MP by Magufuli.
During her husband’s sway, Salma used to be accorded top-level treatments such as receiving reports from Regional Commissioners and being driven in long motorcades.
In Kenya, the wife of former president Mwai Kibaki, Lucy would summon ministers; and reprimand them openly as if she was president herself.
Predictably, shall Grace Mugabe succeed in her gambit; surely, Uganda will follow by having a first presidente.
Thanks to the bedroom politics, how many first ladies do wish they can grab power from their husbands simply because they share beds with them?
As for African strong men, this shows how weedier they are. They might be stronger in the public space. In the private one, they are but tamed bulls that can do whatever those controlling them order them to do even if is to defecate on the office of the president as it is currently going on in the soon-to-be Graceland in which Grace will  filch power from Robert.
How will Zimbabwe and Africa react? Time will tell.

Mhango is a Canada-based Tanzanian author of the following works among many; and is a Peace and Conflict Scholar an alumnus of UDSM (Tanzania) Universities of Winnipeg and Manitoba, Canada.