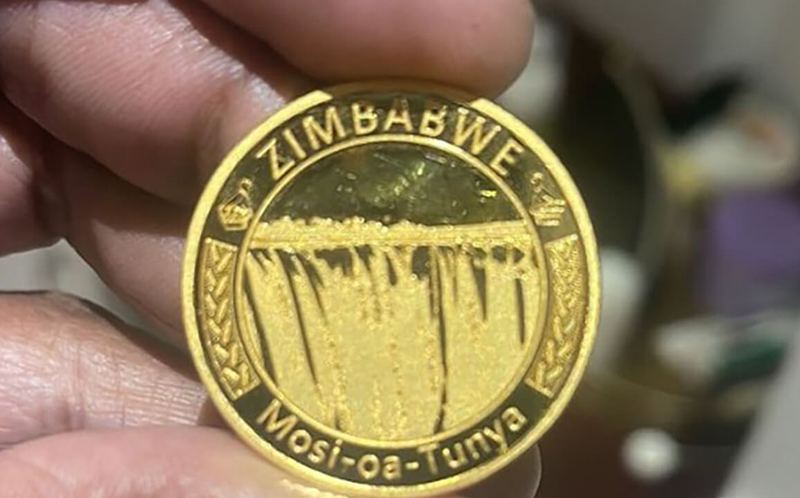 But the Biden administration moved to appease the Chinese regime by vowing that it wouldn’t support independence for Taiwan.

Geopolitical analysts are speculating that Beijing might try to lash out against the United States economically. China and Russia now seemingly have incentive to work more closely together to undermine U.S. interests in international trade. That may ultimately mean trying to dethrone King Dollar as the world reserve currency.

Other countries are also trying to wean their economies off U.S. dollar dependence. An African nation notorious for its bouts of hyperinflation is now encouraging its citizens to save and transact in gold instead of dollars.

Yes, believe it or not, the central bank of Zimbabwe is now advocating for gold. Here’s a report from DW News:

News Reporter #1:$100 trillion, that’s one followed by 14 zeros, that is Zimbabwe’s biggest denomination note from 2008. That year, saw Zimbabwe in hyperinflation, hit one of the highest levels in history with the Zim dollar, essentially not even worth the paper it was printed on. Now, inflation is down to 200%, still one of the highest rates in the world. Zimbabwe’s Central Bank is introducing gold coins.

News Reporter #2:Zimbabwe’s new gold coin is named after the country’s world-famous Victoria Falls. The reserve bank is billing it as a magic bullet in the fight against the country’s inflation problems. The central of bank’s head says the aim is to provide Zimbabweans with a safe store of value and reduce demand for U.S. dollars.

Will Zimbabwe become a model for sound money adoption? Probably not.

The Zimbabwean economy is a mess and most Zimbabweans couldn’t afford to buy even a gram of gold, let alone a one-ounce coin. Moreover, the government isn’t likely to make its currency actually redeemable in precious metal.

But other governments around the world with much larger economies could take similar steps to promote gold as an alternative to U.S. dollars. Chief among them are Russia and China.

In the meantime, the West continues to ramp up economic sanctions against Moscow. This week Switzerland announced sanctions on Russian gold. The move bans the importation of gold sourced from Russia.

While now locked out of Switzerland and other major financial hubs, Russia is unlikely to be deterred from engaging in precious metals transactions. It is a major producer of gold, platinum, and palladium.

Its central bank has been a major accumulator of gold. And since war-related sanctions were imposed, Russia has begun demanding that some of its trading partners pay in rubles or gold rather than dollars or euros.

The world monetary order could be in the process of re-centering around gold in a big way. When mutual trust among nations erodes, gold becomes the ultimate standard of value. It is universally recognized and entails no credit risk when exchanged in physical form.

The same can be said for silver, which is a more practical currency for ordinary citizens engaging in everyday transactions.

While a gold coin could in theory be used to buy gas or groceries, silver coins are handier for such purchases. One-ounce silver coins together with fractional sized silver can be used to closely match actual retail prices for goods and services.

Silver products need not be issued by a government mint such as the U.S. Mint in order to be used legally in barter transactions.

Some investors prefer to own Silver Eagles since they are considered to be legal tender. But Silver Eagles currently command exorbitant premiums over privately minted silver rounds along with silver coins minted by other countries.

Over the past couple years, the U.S. Mint has been perpetually failing to produce enough coins to keep up with demand. It blames a shortage of blanks for the backlog. Yet other mints around the world don’t seem to have a problem sourcing silver for minting.

The U.S. Mint has a statutory duty to produce coins in sufficient quantities to meet demand. But Mint officials apparently feel no particular urgency to fulfill their obligations to silver investors.

Our recommendation to silver stackers at this time is to avoid American Eagles and other U.S. Mint products that carry excessive premiums. Better values can be found in coins produced by other government mints, such as Canada and Australia. Even better values can be found in privately minted rounds and bars that sell for minimal premiums above spot when obtained through Money Metals Exchange.