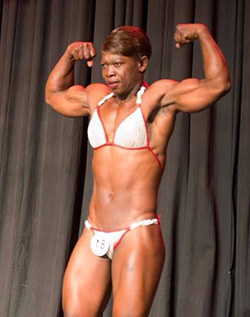 REIGNING Ms Zimbabwe 2015, Regina Jonga, 38, has said that winning this years’ title was not a walk in the park, adding she is however delighted that her hard work is now bearing fruits.
Nicknamed Olla, Regina, says it is not easy for a woman to go on stage showing their muscles.
“Look very few women who take to the stage do that in bikini,” she said.
Speaking to NewZimbabwe.com from Pretoria, South Africa, where she is employed as a domestic worker, Regina said the road to stardom was tough.
She attributes her success to sheer determination and the ability to endure emotional pain and frustrations of life.
“I was once married to a perennial thief who was always in and out of jail and so I said enough is enough, I left him four years ago and immediately joined Matapi Gym in Mbare and started weight lifting.
“But remember I was doing it for fun. It was only when I moved to Scorpion Gym when the owner told me to try and compete at some events that I went on to win Ms Novice 2012,” she said.
After that Regina never looked back. In same year she was Ms Zimbabwe 2nd runner up and went on to win Ms Iron Woman 2013, Ms H & H Pretoria and Ms Limpopo 2015 among other accolades.
She will be representing Zimbabwe at the Arnold Classic 2016 to be held in South Africa.
“I am glad my sweat is bearing fruits now and I hope I will bring the title back home.”
Her challenge however, is funding.
“There are times when I end up eating the wrong food and supplements because I can’t afford the recommended diet,” she said.
“I also have limited time to train because of my job as a domestic worker. I work three days a week for an old white couple and they have been very supportive.
“On top of that I don’t have a manager and a sponsor and this is a barrier when it comes to international events.”
At 1.5 metres tall, the sky is the limit for the Mtoko-born as she aims to become a world champion.Advertisement