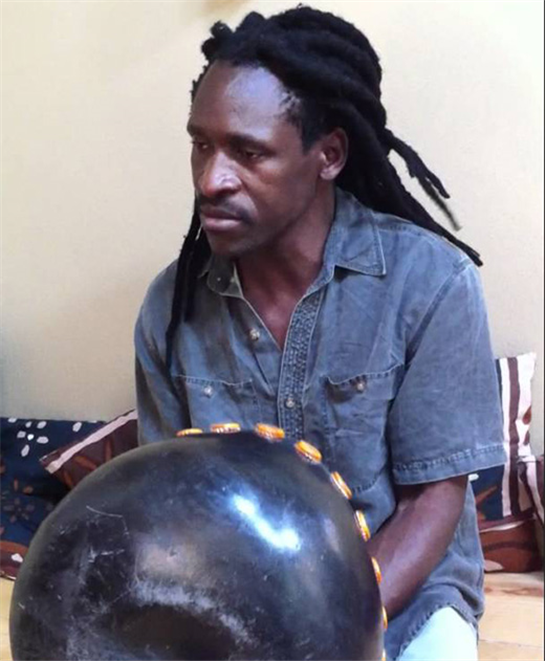 FOR the Mafuleni family, traditional mbira music runs in the blood. They owe everything that they have to mbira music – their house, their car, a recording studio and an Arts Centre.
“Everything that we have came from traditional music, we have known no other job except music and dance,” mbira musician Jacob Mafuleni told New Zimbabwe.com
Mafuleni and wife, Martha Thom, have been in the traditional music industry for more than two and a half decades and have no regrets whatsoever for choosing a music genre that was once looked down upon as backward and even demonic.
“I started doing traditional dance way back in 1990 with Sekuru David Tafaneyi Gweshe’s Boterekwa Dance Troupe, although back then we concentrated on dance and Marimba, while he alone played his own Mbira.
“I only started plying mbira when we were performing at Ramambo Lodge Restaurant. The old men who worked in the restaurant’s kitchen taught me how to play the instrument,” he said.
The music, he said, had reaped them huge benefits, having traversed the length and breadth of the world touring countries such as the United States of America, Sweden, France among others showcasing the true Zimbabwean music.
And now the family wants to plough back into the community which groomed them. They have opened Tsoro Arts Centre at their home in Dzivarasekwa where Jacob, Martha and their first-born son, Abel, teach mbira, marimba and traditional dances such as muchongoyo, mhande, mbakumba and others for free.
“I was shocked by the number of mbira groups that I saw when we toured the USA with Maungira e Nharira in 2008,” he said.
“There were so many mbira groups with Shona names doing Zimbabwean music and I said to myself soon we will be buying mbira instruments and music from the USA.
“So, I felt that I needed to pass on the knowledge of mbira to my community so that we preserve our own culture.”
Mafuleni said the centre was currently teaching 21 students, with the youngest being 10 years old.
“We have three groups, the first being that of children between 10 and 16; the other one from 16 years up wards.
“We also have an all-women’s group because we felt women should also take up traditional music and dance,” he said.
Advertisement

He said they also had a performing group which did marimba, mbira and traditional dances.
“The group does traditional music although we mix it with some bit of contemporary music to keep up with the current trends,” he said.
The talented musician said they had started off with a huge number but some of the children had dropped out after failing to get support from their parents who felt it was not in line with their Christian values.
“I think there has to be a drive to make people understand that mbira music is just an art like any other and should not be associated with ‘mashavi’.
“They should know that this music genre has become big business and is well appreciated in the Western world where Christianity came from,” he said.
The artist said they were currently approaching authorities to avail them a suitable space for the Arts Centre as the current one was small and not very convenient.
Besides teaching the local communities for free, Mafuleni also holds clinics for mbira enthusiasts from across the globe.
“We also hold clinics with people from the USA, Sweden and other European countries. Some come here and stay with us at the Art Centre while they learn. Currently we have someone from the USA who will be here for three months learning the music and dances,” he said.

Mafuleni said he would be going to Sweden this year to teach some people there. So talented is the man that he not only plays and teaches mbira, he also makes different types of mbira and marimba instruments, mostly for the European and American market.
“I make three types of mbiras – namely the Nhare (Dzevadzimu-ancestral) Nyonganyonga (originally from Mozambique) and Njori, from the Makonde area in Zimbabwe,” he said.
The differences between these, he explained, was their shapes and the number of keys they had.
“The Nhare has 24 keys, the Nyonganyonga has 15 while the Njori has 30 keys. When playing the Nhare, one uses three fingers while the Nhare and Nyonganyonga use four fingers,” he said.
Mafuleni has played and recorded with a number of groups and musicians, among them Chioniso Mararire, Mbira dzNharira, Maungira eNharira, Tanga wekwa Sando, Josh Meki.
He is currently working with Hope Masike and has started rehearsals with Chioniso Maraire’s daughter, Chengeto who has just returned home from the USA.
The mbira maestro has also recorded with his now defunct group Sweet Calabash.
“In 2010 we recorded an album with Sweet Calabash using an electric band and in 2011 we recorded an acoustic album using the Njare mbira,” he said.
“This was recorded in Santa Criuse, Carlifonia in the USA. In 2012 we also recorded another album at our own studio but it was launched in the USA.
“The album was taken by a French recording label with a Shona name, Nyaminyami, and they added electronics to two of the songs and they were a big hit in France. They also made a video of one of the songs.”
Mafuleni said the recording label invited them to the Red Bull Festival, one of the country’s biggest music events where he performed with his wife Martha playing the Hosho while a French producer, Garry Greatness, added the electronics.
“We later recorded a seven-track album there in France and we will be travelling to France for the launch during their fall season sometime in September,” he said.
Mafuleni however, lamented the fact that local music was appreciated more by foreigners than Zimbabweans and blamed it all on radio and televisions stations which he said were not doing enough to popularise the music.
“The problem starts with radio stations; they rarely play the music, it’s like the genre is dead now because we are failing to promote our own culture.
“I am however, happy that schools have started promoting the music by holding festivals such as the Arts and Allied Festival which promotes all arts categories and genres of music,” he said.