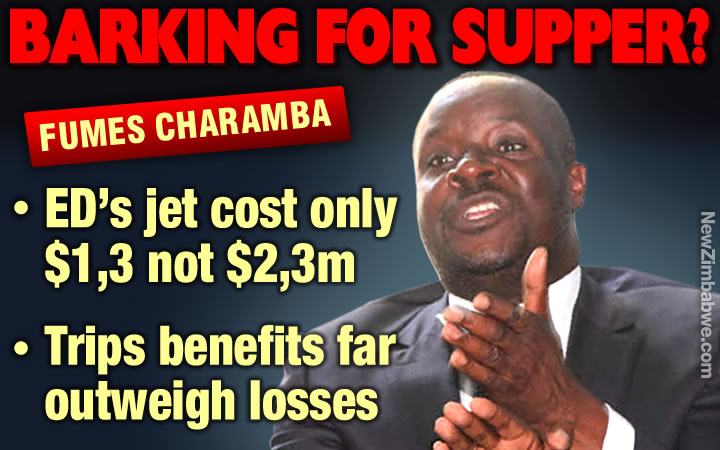 Presidential spokesperson George Charamba said the benefits that President Emmerson Mnangagwa’s foreign trips are bringing into the country are far bigger and better than the millions used to hire private jets.

His remarks come after opposition parties reacted angrily to his recent two foreign trips to Switzerland and China which reportedly gobbled over $4 million of tax payer’s money.

The opposition parties are saying there is no difference between Mnangagwa and his predecessor Robert Mugabe from whom he seized power late last year.

Mugabe could hardly spend a whole full month in the country globetrotting from one country to another while the economy continued to suffer. However Mnangagwa was expected to travel less and focus more on issues at home.

In an interview with a local radio station ZiFm Stereo Charamba dismissed those complaints on Mnangagwa’s travels saying that those who want to see his boss staying at home must open their eyes and see the huge benefits that the trips are bringing into the country.

“Just to get out a single component of the Chinese trip more than a billion dollars investment, simple mathematics will tell you that this is very good accounting and very good economics,” said Charamba Thursday.

“Like what I said in another interview maybe lets have the President stay more out of the country to get more billions coming into the economy than staying home enjoying a starved and unmoving economy as is expected by those people who are arguing that he must stay at home.”

The presidential spokesperson added, “And in this particular case, we are having a catch where the benefits are far outstripping the costs that we are incurring.”

“Just to serve you on a matter of detail the private jet that the President used to China it in fact cost $1.3 million.”

Mugabe’s globetrotting led to many claims that his trips were meant to benefit his hangers on through travel benefits. His retinue, which Charamba was always part of, included a range spies, doctors, body guards, doctors, family members, foreign office officials and other hangers on.

Charamba, defending his then boss’ trips, said Zimbabweans had better live with the fact that foreign policy is costly.