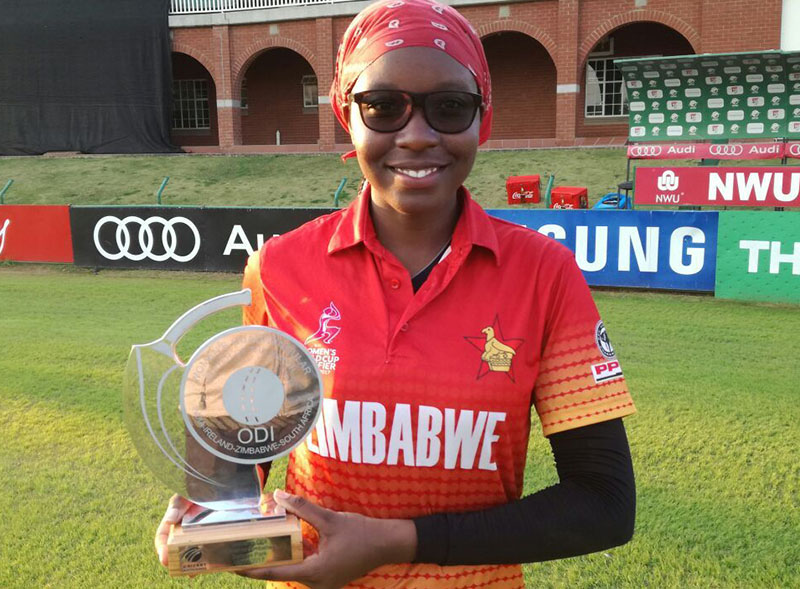 IT HAS has been a difficult two years for Zimbabwe’s women’s cricket team, but captain Mary-Anne Musonda’s century on a winning One-Day International (ODI) debut for the team gives hope for a distinctly brighter future.

Musonda, who scored an unbeaten 103 in Tuesday’s win over Ireland, has been with the side through the best and worst of times but is now finally looking forward with optimism.

Not just on the pitch but off it too, since Zimbabwe are hosting the global qualifying tournament for the 2022 Women’s Cricket World Cup in November and December.

“It’s been a rollercoaster to be frank,” Musonda told BBC Sport Africa.

“When I look back at the path we’ve been on since 2019, we have all the more reason to celebrate now.”

The ride continued on Thursday as Zimbabwe lost the second of their four ODI’s against Ireland, with Musonda brought back to earth when managing just four runs.

Yet resilience is a feature of this side as Musonda and her team-mates could easily have thrown in the towel many times over.

The Lady Chevrons missed out on the 2019 World T20 global qualifiers when Zimbabwe Cricket was suspended by the International Cricket Council (ICC) for government interference on the eve of their departure.

Then 2020 seemed a wasted year with inactivity because of Covid-19 and their trip to the global qualifying stage for the 50-over Women’s World Cup being called off in July last year as the tournament was postponed.

Musonda still recalls the last-minute cancellation of their trip to the global T20 qualifier in Scotland in 2019, having hosted and won the African qualifier.

“I can vividly remember the disappointment, how helpless we were as well, because nothing would change for us in that moment – it was a bitter moment,” she said.

“Then 2020 was another year of not doing anything. It always felt like each time we were supposed to go on tour, something would happen.

“Competition is what makes you better, what you look forward to. When it’s taken away from you on two occasions, it left us disappointed.”

The team was granted ODI status by the ICC in April, meaning that they now play at the highest level in women’s cricket.

And how Musonda shone in the team’s first one-dayer, playing a variety of strokes in a four-wicket win against Ireland in Harare.

“It was like all the negative emotions of the past two years were behind us, and to win and for me to get a century was amazing,” she smiled.

After winning the African qualifier in Botswana in September, Zimbabwe will host the Women’s World Cup global qualifier in November and December with 10 teams taking part. The top three teams go to next year’s finals.

With the likes of Pakistan, West Indies and Sri Lanka taking part in the tournament, it will be a challenge for Zimbabwe, but Musonda is hopeful.

“It means a lot to be hosting, and playing in our home conditions will be an advantage,” she said. “Getting the ODI status and winning our first game puts us in a good place in terms of giving us confidence.

“Playing the qualifiers as home is a boost, we are in the right direction, we hope we are going to continue on a positive trajectory, and that we will keep learning a lot of lessons along the way.”

“We’ve stuck together as a team, and we must keep dreaming, keep believing and keep moving forward – it could have been easy for us to give up on our dream two years ago.”

Prior to those qualifiers, Zimbabwe can win their first ODI series – with two games left in Harare, on Saturday and Monday, and the score finely-balanced at 1-1.