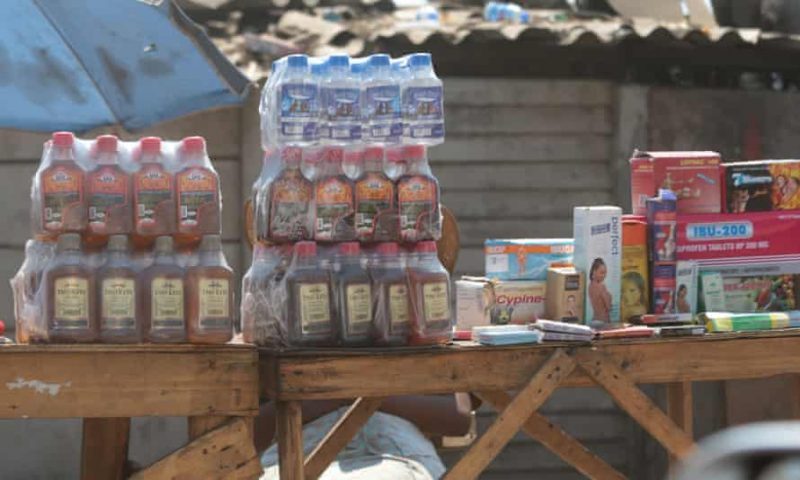 Fake spirits on open display at a market stall in Mbare.
Spread This News

IT IS 7 pm and inside the shebeen, or unlicensed bar, in Harare, men and women clutch small bottles of “whisky” and talk animatedly as they dance to loud music.

One man staggers and falls over, to the amusement of other drinkers. He mumbles inaudible words as he drifts into sleep. Nearby, two other men doze after spending hours in the bar on a sweltering September day.

A group of drinkers erupt into laughter as their young friend soils himself. “He does this all this time. The young boy is a bad drinker,” one says.

This popular shebeen in Mabvuku, east of central Harare, serves up cheap booze and big profits for the manager, Wellington Musema*.

But most of the alcohol on sale is illegal. Bottles of potent moonshine brews, sold under the guise of whisky, gin and vodka, have flooded Zimbabwe over the past few years.

Known by street names such as musombodia, kachasu or tumbwa, the drinks are made by mixing ethanol or methanol with a brownish colouring. Illegal distillers dilute it with water to reduce the alcohol content.

The liquid is then packaged as a legitimate bottle of spirits, complete with imitation labels for brands such as Jameson Irish whiskey, Two Keys and Four Cousins. Even more illicit whisky known as Soldier is sold in plastic sachets.

But while the packaging may claim the drink is 40% alcohol, in reality the content could be much higher, making it dangerously intoxicating and addictive.

Whenever you see someone sleeping by the roadside, either in the heat or in rain, know that these are the effects of this [drink]. It is highly intoxicating and has become highly addictive,” says Samuel Munetsi*, 43, at the shebeen.

While some of the fake spirits are smuggled into the country through the porous borders, others are made locally in backyard stills.

In Harare’s Graniteside industrial estate, several backyard stills have emerged, taking advantage of the increased demand for the illicit drinks after the government closed the beerhalls in March last year at the start of Covid-19 lockdowns.

At Musema’s shebeen in Mabvuku, bottles and red bottle tops are strewn all over the floor.

“My suppliers are in Mbare and always give me good deals because of the volumes I push daily,” says Musema, whose shebeen is often raided by police.

“I have a special supply from people who make this whisky. They give me discounted rates.”

The 35-year-old makes US$150 on a good day. Business is picking up as the government relaxes its lockdown rules.

Gladmore Muyambo*, 35, says she drinks five bottles of the fake whisky a day, as well as lagers and traditional sorghum beer.

Muyambo goes from shebeen to shebeen in the hope that someone will buy her a drink. Her two young daughters are now cared for by her mother.

“I am divorced, and life has been very tough,” she says. “There is nothing else to do but to drink. This is how I drown my sorrows. But I fear that this could kill me one day.”

Although illicit alcohol is not new to Zimbabwe, sales have grown in the townships – along with the use of crystal meth – in recent years amid the country’s economic crisis. Zimbabwe has nearly 90% unemployment, with young people most affected.

In Mbare, one of Zimbabwe’s oldest townships, whisky hawkers display their wares. “Give me US$5, I’ll give you the whole pack, this is good quality,” shouts one seller.

Abigail Chifamba*, 26, sits in the sun cleaning red bottle tops with a toothbrush to prepare packaging for her merchandise. She spends part of her day looking for old whisky bottles she can recycle.

“Packaging is expensive, so I go around looking for used bottles, clean them and repackage the whisky. It is cheaper because they already have labels,” Chifamba says.

She pours brown liquid from a 20-litre container into each bottle, before displaying them on her makeshift stall.

Last month, her neighbour died after a drinking binge. A postmortem examination showed he had a damaged liver, she says.

“We were shocked at his sudden death and the doctors said most of his internal organs had been seriously damaged. I think this is from the heavy drinking of musombodia,” Chifamba says.

Authorities are trying to flush out the illicit alcohol business in Zimbabwe, but it has proved difficult.

Paul Nyathi, a police spokesman, said officers had conducted raids and arrests around the country.

“We are aware that there are people selling fake wines and whiskies made in backyard premises. We have conducted raids in Mbare, Highfields and other parts of Zimbabwe apprehending those selling such substances.

“We are working with beverages companies and other relevant authorities. We urge members of the public to prioritise their health.”

Wilson Box, director of the Zimbabwe Civil Liberties and Drug Network, said the sale and consumption of illicit alcohol had become a national problem.

“The situation is so bad in high-density areas [and] rural areas. In most ghettoes, this is a substitute for the local lagers. The worst-case scenario is that drinkers go into a coma and never recover from it. They die silently but painfully,” Box says.

He urged the government to prioritise cleaning up the streets and closing down the backyard stills.

While the government has set up a national taskforce to deal with endemic drug use, it has yet to do so for alcohol abuse.

“There is no official data on illicit whisky,” he says. “Illicit whisky should be placed as a priority area, just like drugs, because there is no data on it but the effects are just as alarming.”

“It is unfortunate that the authorities and experts do not have figures because there are no official studies. We hope that now that government has set a taskforce to look into drugs, studies would be done on alcohol. Evidence is there right in the street,” he says.

* Names have been changed