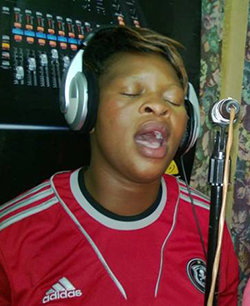 JOHANNESBURG-BASED Zimbabwean gospel music group, Izwi Lesiphelo (The final message), has finally finished recording their third much-awaited album after a year in the studio.
The 12-track offering titled ‘Ngenzintando ka Baba’ (I am doing my God’s will) is full of motivational, worshiping and reviving songs.
The album will be simultaneously released with the group’s first-ever video next month, potentially representing the birth of a new chapter in Zim gospel music
“We are pleased that after nearly a year working hard in the studio we have finally managed to complete recording our third album,” said group publicist Caroline Ncube.
“Our fans should brace themselves for the best release since we started singing. We had to take our time recording this album to avoid making mistakes or becoming a cliché to our fans.
“We are not just singing for the sake of it, we also want to transform our society into a better place through music.
“From our first two offerings we were well received by fans and radio stations in Zimbabwe, South Africa and overseas online radio stations.
“As a group we are convinced that we did our best as we have matured in the industry.”
Featured tracks in the album include the hit title track Ngenzintando kaBaba (I am doing my father’s will), eGolgotha, Jehovah Malusi Wami (Lord is my shepherd), Nkosi Yami (My Lord), Ngosithwala (I will life the cross) and Kheth’u Jesu (Chose the Lord) among others.
The group has also lined-up a regional tour.
“After the release of the album, we will go around regional countries like Swaziland, Lesotho and Botswana, where we were recently invited to perform.
“We have managed to get a lot of various invitations ranging from performing in churches, weddings, parties and we are open to anyone willing to engage us,” added Ncube.
The high-flying Bayethe Music-owned group has enjoyed success with their first two albums – Kuyosulwa Inyembezi (2011) and Ngale Kwelanga (2012).Advertisement