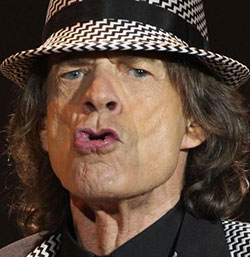 MICK Jagger is refusing to take the blame for Brazil’s World Cup thrashing, despite being branded a jinx for the football teams he backs.
The Rolling Stones frontman, who was pictured at the Mineirao stadium in Belo Horizonte with his son Lucas, looked on as the tournament hosts were beaten 7-1 by Germany.
The 70-year-old told the Sun: “I can take responsibility for the first German goal but not the other six!”
While it might be seen by some as adding a touch of star quality when a celebrity supports a particular team, Brazil fans were less than impressed – even carrying pictures of the musician in a Germany shirt ahead of the game in the hope they would win.
He has been dubbed ”pe frio”, which has been translated as “cold foot” and describes the bad luck he supposedly brings.
The joke around Sir Mick’s bad luck has grown since he backed his home country with a “Let’s go England” tweet just before they were beaten by Uruguay, followed by incorrect predictions that Portugal, and then Italy would win their matches.
Luciana Gimenez, the rocker’s former lover and mother of his son Lucas posted a message on Instagram yesterday appearing to defend Sir Mick from “bullying” online.Advertisement