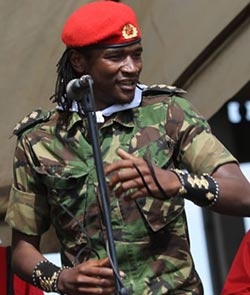 JAH Prayzah Tuesday ran for dear life across the Glen Forest Memorial Park, with some irate mourners in hot pursuit after he was manhandled and stoned during a funeral of his former aide.
Accompanied by his manager Keen Mushapaidze, Prayzah had turned up to Pay his last respects to his former aide, the late Crispen Nyemba.
Nyemba died in a car accident along Samora Machel Avenue in the early hours of Sunday.
However some of Nyemba’s colleagues blamed the musician for their friend’s death.
According to witnesses, mourners had to temporarily abandon proceedings and scamper for the nearest cover as objects were aimed at Prayzah were hurled across the cemetery. Pallbearers had to put the coffin on the ground as emotions ran high.
Clad in a grey outfit, the popular musician was seen being taken away while he continued to duck flying missiles. He was, however, hit by one of the missiles on the back as he tried to place a protective hand over his head forcing him to speed towards his vehicle.
Jah Prayzah’s manager Mushapaidze confirmed the incident and said the musician had since reported the matter to the police.
“We had gone to pay our last respects when some mourners descended on us. We did not know that some mourners were aggrieved. We do not know whether it was because we did not contribute anything towards the funeral or it is because of how we severed ties with Crispen (Nyemba),” he was quoted as saying in the state media.
The Tuesday incident followed another one he was forced to abandon a show in Masvingo after fans threw missiles at him when he was about to perform at Caravan Park last Friday.
That was after show organisers only realised that they had no cables to connect the instruments at around 12.45am, hours after the musician was supposed to have started playing.Advertisement