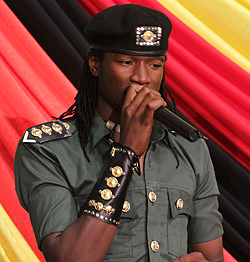 MUSIC has a way of bringing people from different cultures together.
One such unique union has seen a Britain musician travel halfway across the world to Zimbabwe – just to continue a musical exploration with the singer, Jah Prayzah, after a chance encounter in Coventry.
In September 2012, Jah Prayzah had his very first international tour to the United Kingdom. Chris Oswell, an unsigned session musician, accompanied his friend who was doing the sound engineering for the tour.

Oswell so enjoyed the performance by Jah Prayzah and his 3rd Generation band that he wanted to join them on stage.
With the help of Steady Munyanyi, the CEO of Diamond Studios to whom Jah Prayzah is signed, Oswell fulfilled his dream after finding himself in Harare where for two months he became part of Jah Prayzah’s band, playing the saxophone.
Munyanyi said: “I saw this as an opportunity for exchange of talent between the two musicians. I wanted to see how this would impact on Jah Prayzah’s music. I also wanted Chris to experience how it feels to play music to a Zimbabwean audience.
“This was actually part of a pilot programme I’m working on to bring together artists from all over the world to be able to share talent.”
CHRIS OSWELL ON STAGE WITH JAH PRAYZAH