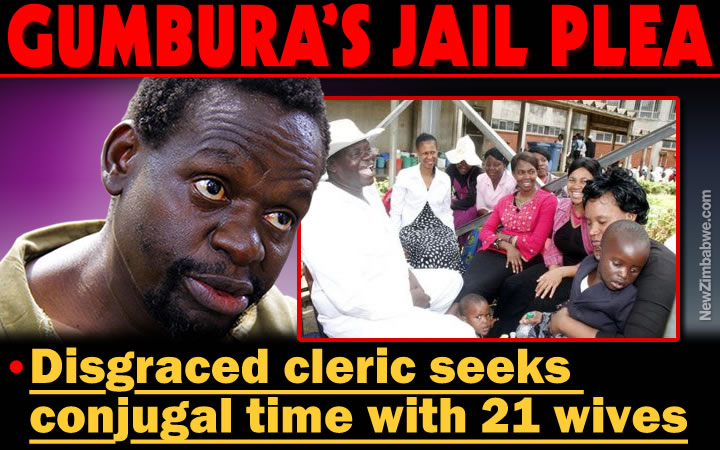 DISGRACED cleric Martin Gumbura, who is doing time for rape, has said he misses his family and being intimate with his many wives.

The RMG Independent End Time Message ministry leader had 21 wives at the time he was slapped with a 40-year jail sentence for rape in 2013.

Some of the women visited their husband during the just-ended Zimbabwe Prison and Correctional Services (ZPCS) Family Week.

The women refused media interviews at Chikurubi Maximum Security Prison on Sunday saying they were subjected to a hate campaign on social media after speaking out last year.

“Please leave us alone; the media have not done us any good since Baba (Gumbura) came here. We will never speak to you again,” said one of the women.

“Talk to him; at least he is far from the outside world and won’t be able to read or see some of these hate messages.”

The now ebullient cleric was in good spirits and quite effusive saying misses his children and wishes he could be allowed sex with his wives.

“I wish this (family week) was done even monthly; it gives me the opportunity to be with my family and spend time with them,” he said.

“I know they (family) are coping well but, like any big family, they need a father figure.”

He added; “One more thing I wish during this week is if we could be allowed to have conjugal rights with our wives.”

Gumbura expressed the same wish last year, saying; “I hope they create a conducive environment where we can also be intimate with our wives.

“The Family Day is a nine-day event. If the opportunity was there, I would have been intimate with 18 of my wives, two on each day, during this period.”

Told on Sunday that that some of the women had since left, Gumbura said he would deal with the matter when he leaves prison.

“I will see when I am out who is still with me. But, as you can see, I have some here; they have been taking turns to visit me during this week-long visit.”

At the time of his conviction, Gumbura had 21 wives and 34 children. Four of the women have reportedly since left the family compound.