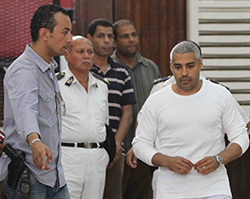 JOURNALIST Mohamed Fahmy, who spent more than a year in jail in Egypt, is suing his employer Al Jazeera for $100m (£53m).
Fahmy, who was acting bureau chief for Al Jazeera’s English channel in Egypt at the time of his arrest on terrorism-related charges, filed the lawsuit in Canada.
He has accused the network of endangering him and his colleagues.
During a media conference on Monday, Fahmy, a dual Canadian-Egyptian citizen, said: “Now, I will sue them at any cost, and I will win.
“They don’t seem to understand that they cannot continue to challenge the sovereignty of governments, put the story ahead of the safety of their employees, and assume that they will continue to get away with it.”
The lawsuit, filed at the British Columbia Supreme Court, is seeking C$100m in punitive and remedial damages and accuses Al Jazeera of negligence, negligent misrepresentation and breach of contract.
Fahmy accused Al Jazeera Arabic platforms of advocating for the Muslim Brotherhood, the party of ousted Egyptian President Mohammed Morsi that has been branded a terrorist organisation by the Egyptian government.
He said Al Jazeera’s local affiliate Al Jazeera Mubasher Misr provided cameras to Brotherhood members and took raw footage from them, without making Al Jazeera English staff aware of their practices.
A statement issued by Al Jazeera said: “It’s sad to see Fahmy and his lawyer repeating criticisms of Al Jazeera made by the Egyptian authorities. It’s what his captors want to hear at this stage of the retrial.
“All governments have news outlets that they don’t like, but they don’t use spurious grounds to put journalists in jail. If Fahmy wants to seek monetary compensation from anyone, it should be from his jailers.”
Fahmy was granted bail by a Cairo court in February but is facing a second trial along with Egyptian producer Baher Mohammed.
They are accused of being part of a terrorist group and airing falsified footage intended to damage national security.
Peter Greste, an Australian colleague who was sentenced with Fahmy and Mohamed, was freed earlier this year.
Fahmy maintains that his team was doing balanced and independent reporting.
Prosecutors are expected to begin their closing arguments in the retrial on June 1.Advertisement

Egypt and Qatar have had tense relations since 2013, when the Egyptian military ousted Morsi amid massive protests.
Doha is a strong backer of Morsi’s Muslim Brotherhood and other Islamist groups in the region.
Cairo accused the Qatari-based network of being a mouthpiece for Morsi’s supporters, charges denied by the broadcaster.