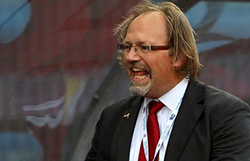 AS THE new Zifa Board, chaired by Phillip Chiyangwa met in Harare on Tuesday, the stark reality is that if they fail to pay former Warriors coach Tom Saintfiet $150,000 by January 4, then Zimbabwe is out of the 2022 World Cup due to take place in Qatar.
Chiyangwa is the new president, with Omega Sibanda returning to the board as his deputy.
Premier Soccer League chairman, Twine Phiri, women’s football boss Elizabeth Langa, while Edzai Kasinauyo, Philemon Machana, Piraishe Mabhena and Felton Kamambo occupy the other seats on the board.
The Warriors are already banned from the 2018 World Cup qualifiers after failing to settle an $81,000 debt owed to another former coach Jose Claudinei Valinhos.
The Fifa Disciplinary Committee has handed down judgement on Saintfiet’s case and on Saturday, a Fifa representative who observed the Zifa elections at Mt Hampden that ushered in Chiyangwa confirmed that Zimbabwe simply has to pay up by that date or risk expulsion.
Saintfiet was handed a four-year deal in 2010, but only took charge of two training sessions in one day before he was deported for working without a work permit.
He then sued for half a million dollars, but the Fifa DC whittled down his claim to $150,000.
Zifa’s debts, according to audited accounts presented on Saturday, indicate that the beleaguered association is in the red to the tune of over $5 million.
They owe former president Cuthbert Dube $438 222.
As of December last year, Zifa’s debt sat at $5 015 426 and it could have increased, with interest accruing on loans, while the association has been facing litigation from former employees.
Compared with 2013, last year, Zifa saw more money coming into its coffers from both Caf and Fifa through grants.