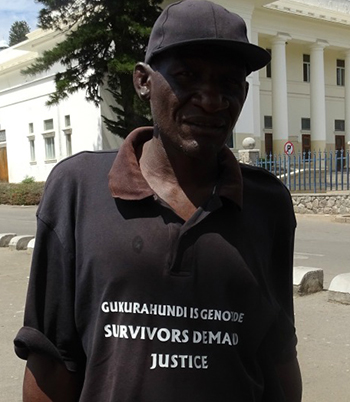 GUKURAHUNDI survivor Charles Thomas who is accused of killing a police officer during last month’s violent protests has taken his bid for bail to the High Court.

Thomas and co accused Bernard Sibanda have been languishing at the notorious Khami Prison for about a month after being denied bail at by a city magistrate.

Defence lawyers confirmed to NewZimbabwe.com that the High Court will hear their bail application this week.

“We have already submitted our arguments opposing the continued incarceration of the accused. The state has also positively responded to our application.”

Prosecutors claim that the fatal attack on the police officer occurred on January 14 in Njube suburb as anti-government protests rocked the country.

The accused reportedly ganged up with a mob and stoned police officer Ekson Maune until and left him for dead.

Maune later succumbed to injuries sustained during the attack at the United Bulawayo Hospitals (UBH).

Thomas was in 2011 arrested alongside exiled politician Paul Siwela for allegedly distributing fliers calling on Zimbabweans to revolt against the government.

The two were charged with treason but were later acquitted.