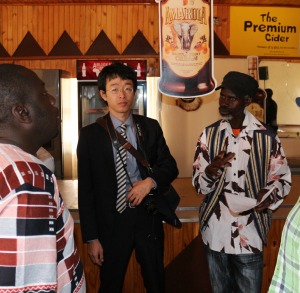 JAPANESE artistes are set to showcase their artistic skills at Amakhosi Cultural Centre in Bulawayo as part of cultural exchanges between Zimbabwe and the Asian country.
Masa Lida, the second secretary at the Japanese Embassy in Harare told NewZimbabwe.com that artistes Sakaki Mang and Matchume Zango will perform at the ceremonial home of Zimbabwe’s theatre on February 16.
The performance will be followed by a bigger arts group from that country which will do collaborations with local artistes in May.
“In February and May we are bringing our artistes here. We are looking forward to a wonderful collaborative effort as we learn from their culture and hopefully they will also learn something from our culture,” said Lida.
Amakhosi founder and Director Cont Mhlanga hailed the programme as a platform for Zimbabwe’s culture exportation.
“Zimbabwe cannot continue to be a recipient of different foreign cultures. The time has come for our culture to also influence other people’s cultures,” said Mhlanga.
Under the arrangement, Mhlanga said, Amakhosi has recorded a traditional Amabhiza classic song Ubaba wazali lema (Dad fathered an imbecile) which they have already sent to Japan. Japanese artistes will perform the song.
“They will learn to present it the way we do it here. They are also going to present the song at this year’s HIFA edition,” he said.Advertisement