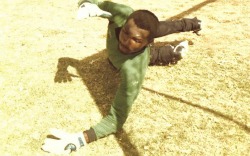 LEGENDARY Warriors goalkeeper, Japhet Mparutsa, has published an autobiography tracing his roots from being a mere township boy to national soccer stardom.
Mparutsa, known to soccer fans as Shot Cat, said he wrote and published his life story in the hope that it would inspire others to dream big and never give up on their dreams.
The book, titled My Story, traces the 1982 Soccer Star of the Year’s humble beginnings to national hero, the challenges he faced and his determination to succeed and overcome, becoming of one the finest goalkeepers in post- independence Zimbabwe.
Mparutsa bares his soul, capturing the highs and lows that he experienced on and off the football pitch when he brought tears, mostly of joy, to fans countrywide.
The 74 page book which features pictures on his playing career is co-authored with Lot Danai Chitakasha.
Hailing from the dusty streets of Mbare in Harare, the Shot Cat said, for him, his life had two halves- a soccer player and now a practicing Christian.
“The good editor of one’s life story is the person himself,” Japhet told NewZimbabwe.com from his base in the UK.
“It’s important to tell your story when you are still alive so that those who may have questions may ask you and clarify issues.”
In a career spanning 17 years, Japhet played for Zimbabwe’s football giants Dynamos, Black Rhinos, the now defunct Darryn T and South Africa’s premier league side, Bloemfontein Celtics.
The legendary goalie said proceeds from book sales will be used to help upcoming soccer stars.
“I have seen that most community based recreation facilities have gone down and no one seems to care.
“So, I want proceeds from the book to be channelled towards the renovation of those facilities with some money used to train younger stars to become national heroes,” he said.
Mparurutsa urged parents to support their children as sport is now a better rewarding profession.
“Football unites people, be in their own communities and far beyond, it’s a people’s game,” he said.
Short Cat stormed all weathers to win the Soccer Star of the Year Award, Zimbabwe’s most prestigious football award, at the mere age of 18.
Former Highlanders FC and Liverpool goalkeeper, Bruce Grobbelaar, described the book as straight from the heart.Advertisement

“A story of persistence and determination in the face of adversity,” said the Jungleman, also a Warriors legend.