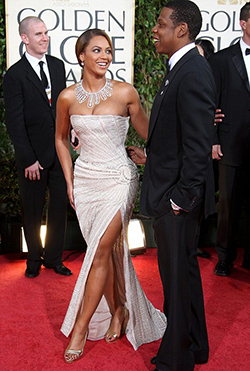 JAY Z and Beyonce have reportedly been using their estimated $1bn fortune to help post bail for people arrested during protests against the police in the US.
Dream Hampton, a writer and activist who worked with the rapper on his 2010 memoir Decoded, made the revelations in a series of tweets which were deleted but captured by hip-hop magazine Complex first.
“When we needed money for bail for Baltimore protesters, I … hit Jay up, as I had for Ferguson (and he) wired tens of thousands” of dollars within minutes, read one tweet.
She also tweeted that Jay Z and his pop superstar wife wrote a “huge cheque” to support the burgeoning Black Lives Matter movement aimed at stopping police brutality.
Protests spread last year after a white police officer shot dead African American teenager Michael Brown in the St Louis suburb of Ferguson.

Major demonstrations erupted in Baltimore last month after another black man, Freddie Gray, died from a spinal injury sustained in police custody.
The tweets appeared aimed at defending Jay Z and Beyonce, who have faced accusations from some activists that they have only paid lip service to the cause and not donated any money.
Hampton later wrote that she deleted the tweets because Jay Z “would be p*-****d to see I was offering evidence” that he is taking action.
On Saturday Jay Z gave an exclusive performance for Tidal, the music streaming service he has launched with fellow stars, in New York.
In a freestyle rap segment, Jay Z paid homage to Mr Brown and Mr Gray – and belittled Tidal’s rivals Spotify and Apple.
Jay Z and Beyonce met the men’s families last week at a peace concert in Baltimore where Prince performed but left without making public appearances.Advertisement