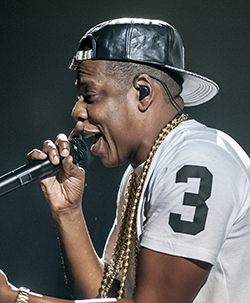 HE is one of the wealthiest figures in music, but Jay Z is reportedly trying to keep his good fortunes under wraps.
Reports claim that the hip hop mogul has asked a judge to block details of his net worth and criminal history from being revealed in a trial regarding his single Big Pimpin’.
The heir of an Egyptian musician is said to be suing the 45-year-old rapper and husband of Beyonce Knowles for allegedly sampling a 50-year-old track on his Timbaland-produced single, recorded in 1999 and released a year later.
According to TMZ, Jay Z believes neither his previous arrest record nor his bank balance are relevant to the lawsuit, so should not be made available to the deciding jury.
However, the plaintiff are accusing the Watch The Throne hit-maker of stealing the sample, so feel that such information is necessary.
The website reports that the judge is still deciding on what to allow in the trial, which starts on 13 October 2015 in Los Angeles.
According to Forbes, Jay Z has an estimated wealth of $520m and has reportedly earned an $56m in 2015 so far.
In relation to his criminal history, Jay Z has made no secret of his past as a drug dealer before he first found fame in the mid-1990s.
The rapper was also accused of stabbing a record executive at a party in 1999, and later plead guilty to a misdemeanour and received a three-year probation order for the offence in 2001.
Big Pimpin’ appears on Jay Z’s fourth album Vol. 3… Life And Times Of S. Carter.
It is said to feature a flute sample that was originally recorded by Baligh Hamdy for Hossam Ramzy’s version of the well-known Egyptian song Khosara Khosara in 1957.
Jay Z’s team are said to have paid $100,000 to record label EMI Arabia in 2001, with the money distributed to Hamdy’s family following his death in 2003.
Hamdy’s family first filed the lawsuit in 2007, but Jay Z’s record label hit back at the allegations, stating in legal documents, “The notion that people buy concert tickets to hear one song, never mind an instrumental sample contained in one song that may or may not be performed at any given concert, is beyond speculative – it is farcical.”Advertisement