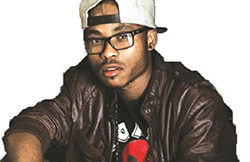 THE impressive Cal_Vin leads this year’s Zim hip-hop awards with seven astonishing nominations which include Best Video, Best Album, Best Male, Best Collabo, People’s Choice, Best Producer and Song of the Year.
In an interview with New Zimbabwe last week, the Bulawayo-based artist revealed that he is heavily influenced by the likes of Jay Z, Lil Wayne, Tupac, Michael Jackson and South African award rapper Cassper Nyovest.
The awards ceremony will be held early December at Club 1+1 at Long Cheng Plaza with fireworks anticipated at the red carpet event.
Sean Campbell, one of event’s organisers, said: “Preparations are at an advanced stage and we have re-branded these awards.
“Like we always say, this year is a little different and there are some professional music gurus that we are also working with.”

Campbell added that he was also excited about the response his event has received from the fans, musicians, critics and the corporate sector.
“We should trust our adjudication teams who have been working tirelessly to put everything in order. So far, preparations are at advanced stage,” he said.
An impressive line-up of stars has also been put together to perform at the awards.
“The list of performers includes Stunner, Tehn Diamond, Dollar Sign Music, ProBeats, GT Beats, Briss Mbada and Guluva Seven among others.
“This is a red-carpet event which will see the best-dressed male and female being awarded a prize,” he said.
Advertisement