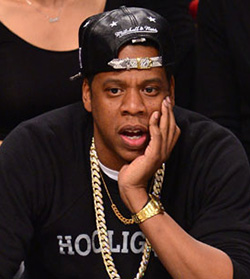 RAPPER Jay-Z has several reasons to be happy right now.
Less than a month after it was announced he and his wife Beyonce are expecting twins – he is to receive a top songwriting honour.
Jay-Z is to become the first rapper ever inducted into the Songwriters Hall of Fame in the US.
A handful of artists who are considered to have “enriched the world’s culture” with their songwriting and music are selected for induction every year.
Joining the hall of fame is a huge deal – previous inductees include Marvin Gaye, Bob Dylan, Dolly Parton, Bruce Springsteen and Michael Jackson.
But no rapper has ever made the cut before.
Jay-Z will be inducted as part of the hall’s class of 2017 alongside Max Martin, who has written songs for Taylor Swift, Katy Perry and Ariana Grande.
Other inductees this year will include Jimmy Jam and Terry Lewis. The duo have written and produced number one singles for Janet Jackson, Mariah Carey and Usher, among many others.
‘Changed the way we listen’
Songwriters are eligible for induction after writing hit tracks for at least 20 years.
This explains why Jay-Z is being inducted now – as he recently passed the 20th anniversary of his debut album Reasonable Doubt, released in 1996.
Chic guitarist Nile Rodgers, who was one of last year’s inductees, said Jay-Z had “changed the way we listen to music”.
Madonna and George Michael were both nominated this year as well but weren’t chosen this time.Advertisement