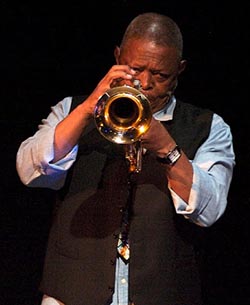 LEGENDARY South African Jazz musician, Hugh Masekela, has died.
Masekela succumbed to prostate cancer at the age of 78 in Johannesburg.
In a statement, his family said the musician, known as the Father of South African Jazz, battled cancer of the prostate for more than a decade, having last performed in 2010 at the official opening of the World Cup tournament which was being hosted in Africa for the first time in its history.
“A loving father, brother, grandfather and friend, our hearts beat with a profound loss. Hugh’s global and activist contribution to and participation in the areas of music, theatre and the arts in general is contained in the minds and memories of millions across six continents,” the family said in the statement released early Tuesday.
Masekela, who was also an anti-apartheid activist, will be remembered for his song, Bring Him Back, which was dedicated to the then incarcerated ANC leader, Nelson Mandela in 1987.
Born in Witbank, South Africa, Masekela started playing the piano in the dusty Soweto township in the 1950’s and composed his first song, Soweto Blues in 1976, in response to the Soweto uprising.
Masekela has also featured in the movies Sarafina and Amandla: A Revolution in Four Part Harmony.
Advertisement