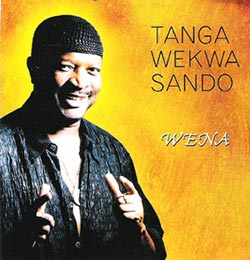 AFTER what had seemed an endless hiatus and with repeated “sightings” of him having turned his hand to business, jazz virtuoso Tanga Wekwa Sando has indeed returned to music.
Following on the release of his scorcher of a piece entitled Tsindi, which has started getting rave reviews on Zimbabwe’s airwaves most notably becoming a listener’s favourite on Star FM, Tanga has confirmed that he is back to his first love for another long romantic dance as well as returning to the live music circuit.
“I have been taking my time to ensure that I come up with a well-polished product that will pay tribute to the quality of fans that I have who are discerning and have an ear for well-produced music. So this project has been marked by hard work and dedication,” the renowned perfectionist told NewZimbabwe.com.
“While I have been giving attention to my business interests, I have in no way abandoned my passion for making music and was just taking a sabbatical from live shows and tours while I put together my business interests as well as took time in the studio to come up with the new album which also includes the now popular Tsindi,” he said.
Several fans were excited to learn that the Buhera, Wake, and Mba Mba Mba singer would soon be returning to live shows. News of his first return gig date was made available through his publicists, who announced an April 4 gig that would be held at Harare’s Misty’s Club and Restaurant in Newlands Shopping Mall.
“We shall indeed be unveiling a fresh band that shall cater to the needs of our fans who have long been starved of their favoured music for a long time.
“We are certainly going to make sure that the music shall revive the love for jazz not as a sophisticated genre of music but as a genre of music that can appeal to people across the social strata,” said Tanga.
Having either won or been nominated for all the important awards at home and on the continent, Tanga’s new thrust is to create music that shall attract attention from across the globe.
“Certainly it would be a great feeling to fly the flag by hitting markets in new frontiers particularly with a genre of music as world-appreciated such as jazz and also show that, with a touch of the Zimbabwean flavour, jazz can take on a fresh dynamic face.
“So there is an effort to make the music widely appealing as well as also retain the flavour of sound that has made Tanga Wekwa Sando brand of Tega Tega Music widely appealing to our loyal audiences,” said Tanga.Advertisement

With the flavour being evident in the track in Tsindi and the current appeal the scorcher of a single has become, it shall definitely not be beyond imagination that the returning Tanga Wekwa Sando breaks into fresh and more lucrative markets as a music ambassador for brand Zimbabwe.