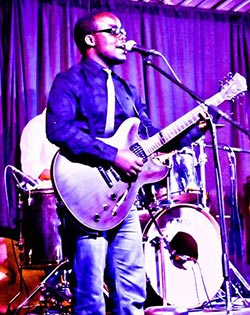 BULAWAYO has been known for producing music icons who have gone on to conquer the world. Talk of Lovemore Majaivana, Dudu Manhenga, Busi Ncube and Dorothy Masuka who, in their own right, are legends and rank among the best musicians to emerge from Africa.
The above mentioned musicians also have something else in common; not only did they sing Afrocentric music, they also left the city, the cradle of the country’s arts, to pursue their trade elsewhere.
Lovemore Majaivana has since quit music and moved to America.
Realising a massive void left by the icons, a contemporary Jazz outfit, The Outfit, has risen up, and judging by their performances to date, they are well on their way to stardom.
The band, which has shared the stage with inimitable music giants like Dorothy Masuka, Judith Sephuma and Oliver Mtukudzi, will launch their 10 track album titled Smile, on March 27 at Horizon Pub and Restaurant, in Bulawayo.
The official launch will also see them record their live DVD album.
What started off as a few jam sessions among friends at High School in 2007 soon grew to a serious passion and 2010 it all came together, with the group performing at a few gigs in town.
The five member band made up of Samuel Siwela (vocalist and lead guitarist), Obey Mudiwa (drummer) , Julius Phiri (keyboardist), Thiyelani Chauke (keyboardist) and Blessing Sitotombe (bassist) have set their sights on conquering the world and following the footsteps of their predecessors.
In an interview with NewZimbabwe.com, band member Samson Siwela said they were inspired by the way they view the world and they decided to capture that in the form of music.
“We are mostly into Jazz but we fuse it with different styles of music. Most of our songs are love songs and I can say that is where we derive our inspiration as a group,” said Siwela.

While most artistes around the country and even in the continent dream about sharing the stage with the likes of Mtukudzi, Judith Sephuma and Dorothy Masuka, the group has managed to achieve that in a relatively short space of time in their musical career.
“Our major highlights, so far in our music journey, include when we curtain-raised for Judith Sephuma when she came to Zimbabwe in 2011.Advertisement

“We have also shared the stage with Dudu Manhenga and we also performed at Oliver Mtukudzi’s 60th birthday celebrations and we also backed Dorothy Masuka when she performed at the NAMAs in Bulawayo,” said Siwela.
The group has also performed at various venues in Bulawayo and Harare.
Despite their astronomic rise, the group is not so known in its hometown and Siwela attributes this to the music scene in Bulawayo.
“In Bulawayo, there aren’t too many afternoon functions and its mostly evening functions. The other thing is that most people in the city are not outgoing and most people do not know that there are bands that exist in Bulawayo.
“We have really tried to push and advertise but somehow I think it’s just a system that has been around for a long time,” he said.
Siwela said the launch of their album will be a stepping stone to penetrating the region and the international stage.
“In the next five years we are looking at creating great music that can go international,” he said.
“We hope we can become standard bearers and known as musicians not only from Zimbabwe but Bulawayo because Bulawayo has been quiet for a long time and there has not been many young artistes who go into the music industry on a serious note and we want to take it to that level,” he said.
So the next time you hear that The Outfit band are playing at a venue near you, make your way there and enjoy some funky jazz music.