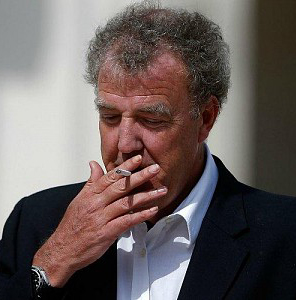 FORMER Top Gear host Jeremy Clarkson has claimed he was offered a sensational return to the hit show, days after his former job was given to Chris Evans.
The journalist, axed in March for punching producer Oisin Tymon in a row over a steak dinner, told the Sun he met an unnamed BBC executive last week before Evans, 49, was unveiled as the new host.
But he said that he turned it down because of what had happened since his departure, including being compared to paedophile DJ Jimmy Savile.
Clarkson, 55, told the Sun: “I had a meeting with a BBC executive last week and they asked if I’d come back to Top Gear.
“But it was never an option, even with the one million people signing the Bring Back Clarkson petition – for which I was extremely humbled.
“Too much has gone on. After I’d been compared to Jimmy Savile by someone from the BBC and it was splashed all over a Sunday newspaper, how could I go back?
“The spotlight would have been on me and the show would end up being neutered. It would be difficult to do anything without interference. It would have been impossible to make the show I’d want to make.”
A BBC spokesman said: “We haven’t offered another Top Gear contract and the BBC had placed on record its thanks to Jeremy for his broadcasting on the programme and wish him well for the future.”
Petrolhead Evans was unveiled as the new face of Top Gear on Tuesday and has since revealed he is to hold auditions to find a co-host.
On Thursday he called on Top Gear fans to send in short audition clips for a job on the show, as he admitted he has been terrified of losing his driving licence since landing the presenter role.
The Radio 2 breakfast show DJ said that he had “never driven more carefully” since getting the hosting job.
He told candidates they needed to have an “appetite, hunger and need” to host the motoring show, and to send in videos of themselves from the waist up, with “no stunts, no gimmicks” or cars, behaving as they would if they were on the show.Advertisement