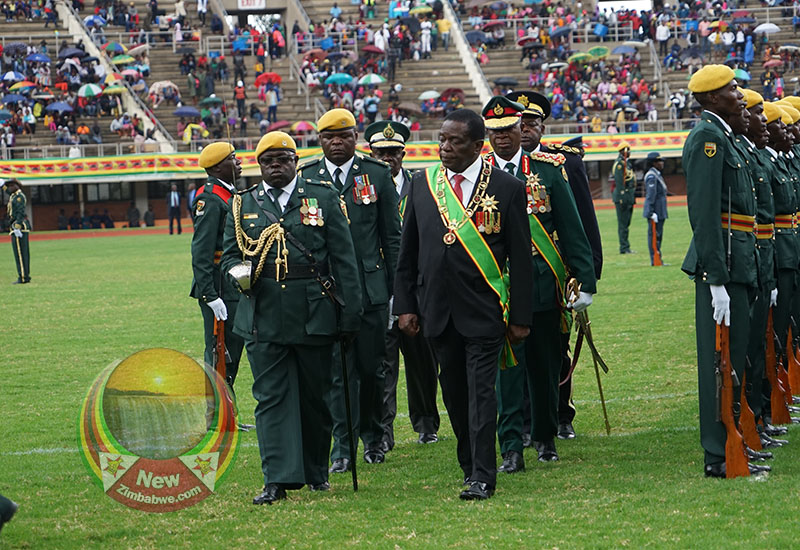 A seemingly rattled President Emmerson Mnangagwa has moved to pacify restive soldiers in the rank and file of the army by promising a new salary structure probably as a way of forestalling possible mutiny ahead of a mass demonstration called by the opposition MDC later this week.

In his keynote address to mainly members of the country’s security services to mark Defence Forces Day Tuesday, Mnangagwa said his government is aware that conditions of service among security forces was woefully inadequate.

Mnangagwa said steps are at an advanced stage to reintroduce what he called a military salary concept.

“My administration remains committed to improving the conditions of our armed forces. Is equally aware that our defence force is equally affected by the economic difficulties faced by the general citizenry,” said Mnangagwa.

The military salary concept, which was stopped following the dollarisation of the economy, sought to reward general duty soldiers.

“Efforts are at an advanced stage to reintroduce the Military Salary Concept,” Mnangagwa added.

Zimbabwe’s military, Mnangagwa said, is in dire need of modern equipment and technology.

“In view of the ever-changing socio-economic and technological and security architecture, the modernisation and capacitation of our Defence Forces has become urgent and imperative. My government is therefore prioritising the upgrading of equipment as well as facilitating focused training of specialising units in both Army and Airforce,” he added.

On Monday, MDC president Nelson Chamisa seems to have sent out an olive leaf to the army to join his party’s planned demonstrations on August 16th.

Chamisa said when his party members take to the streets or complain, they do so, on behalf of all Zimbabweans struggling under the current economic difficulties including those in the security services.

Mnangagwa came to power in November 2017 on the back of a military coup that toppled his predecessor Robert Mugabe.

Analysts have warned Zimbabwe is treading on dangerous territory with the possibility of another coup always lurking.

The MDC has given notice of what it has called “Free Zimbabwe March” set for August 16th which it officially says is aimed at pushing Mnangagwa to dialogue with Chamisa and find a lasting solution to “legitimacy issues” surrounding the Zanu PF leader’s year old administration.