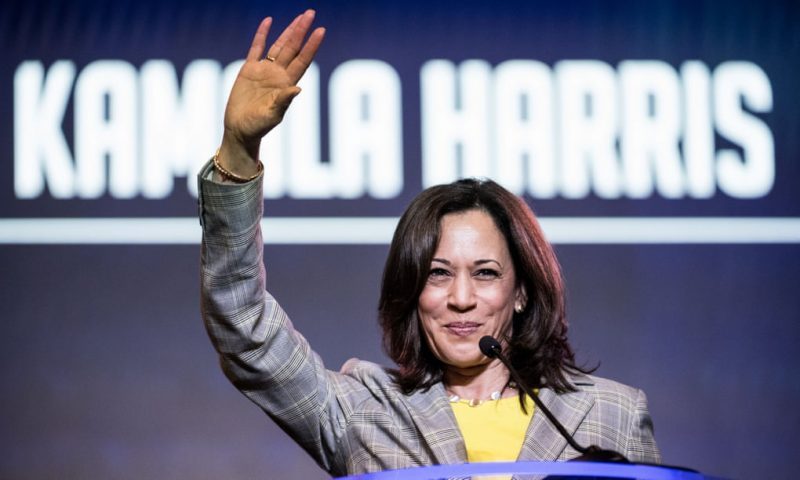 JOE BIDEN has named California senator Kamala Harris as his vice-presidential running mate, a historic choice he believes will bolster his chances of beating Donald Trump in an election year shaped by the global coronavirus pandemic and a national reckoning on race.

Harris – Biden’s former Democratic presidential rival and a barrier-breaking former prosecutor – is the daughter of immigrants from Jamaica and India and is the first Black woman and the first Asian American to be nominated for a major party’s presidential ticket.

“I have the great honor to announce that I’ve picked @KamalaHarris – a fearless fighter for the little guy, and one of the country’s finest public servants – as my running mate,” Biden wrote on Twitter.

In a tweet, Harris said she was “honored” to join Biden on the Democratic ticket and pledged to “do what it takes to make him our Commander-in-Chief”.

Biden announced the selection in a text and email message to supporters. His campaign said the two would hold their first event together on Wednesday, in Biden’s hometown of Wilmington, Delaware.

Though Biden and Harris clashed during the Democratic presidential debates before she dropped out of the race last year, she has become a strong supporter and a voice of authority on issues of racial justice in an election year convulsed by nationwide protests in the wake of the police killing of George Floyd.

The decision is of great consequence, not only for Democrats’ immediate political prospects but for the future of the party.

Biden, who, at 77, would be the oldest person ever elected, has pitched himself as a “transitional candidate” and a “bridge” to a new generation of leaders, fueling speculation that should he be elected, he would be a one-term-president.

In selecting Harris, a 55-year-old Democratic star, he may not only be naming a partner but a potential successor who could become the nation’s first female president.

Harris is among the most prominent Black women in American politics, with appeal across the party’s ideological spectrum. She served six years as the attorney general of California before arriving in the Senate in 2016.

During the primary, Harris struggled to reconcile her prosecutorial record with her support for criminal justice reform, facing criticism from progressives who doubted her evolution on the issue. But on Tuesday, the announcement was celebrated by Democrats from diverse political backgrounds.

“Joe Biden nailed this decision,” said Barack Obama, who went through a similar process in 2008 when he selected Biden as his running mate, in a statement.

“By choosing Senator Kamala Harris as America’s next vice president, he’s underscored his own judgment and character. Reality shows us that these attributes are not optional in a president. They’re requirements of the job.”

“She understands what it takes to stand up for working people, fight for health care for all, and take down the most corrupt administration in history,” Senator Bernie Sanders tweeted.

Black women were critical to Biden’s success in the Democratic primary, lifting him to victory in South Carolina after series of stinging losses. But the political landscape changed after Floyd was killed in Minneapolis in May, touching off months of mass anti-racism protests that intensified pressure on Biden to to select a Black running mate.
‘People are ready to see Black women lead’: US sees wave of progressive victories by people of color

“For a little girl who grew up poor, Black and female in the South to be considered during this process has been an incredible honor,” said the Florida congresswoman Val Demings, who was one of six Black women considered for the role. “I feel so blessed. To see a Black woman nominated for the first time reaffirms my faith that in America, there is a place for every person to succeed no matter who they are or where they come from.”

Harris’ own presidential campaign began on a high note in January 2019, as she announced her candidacy on Martin Luther King Day and paid tribute to Shirley Chisholm, the first Black woman to seek the nomination of a major party.

She officially kicked off her campaign with an Oakland rally attended by more than 20,000 people. The one-term senator was considered an early frontrunner for the nomination, and her polling numbers surged after a contentious exchange with Biden at the first Democratic debate.

Harris pushed Biden on his past opposition to mandated busing to racially integrate schools. “There was a little girl in California who was part of the second class to integrate her public schools and she was bussed to school every day.

That little girl was me,” Harris told Biden.

Biden appeared taken aback by the confrontation, but the two Democrats indicated they had made amends after Harris suspended her campaign in December. Harris endorsed Biden’s presidential bid in March.

The Trump campaign immediately seized on their debate exchange to cast Harris as hypocrite, while assailing her – in the same sentence – as both a tough-on-crime prosecutor and a far-left radical.

“Not long ago, Kamala Harris called Joe Biden a racist and asked for an apology she never received,” said Katrina Pierson, a senior adviser to the Trump campaign and one of his most high-profile Black surrogates. “Clearly, Phony Kamala will abandon her own morals, as well as try to bury her record as a prosecutor, in order to appease the anti-police extremists controlling the Democrat party.”

Though Harris has long been viewed as a likely contender for the nomination, some advisers and allies of the former vice-president harbored reservations. In the weeks before she was selected, reports surfaced that the former senator Chris Dodd of Connecticut, part of Biden’s vice-presidential vetting panel, had told donors she demonstrated “no remorse” for her attacks on Biden while on a debate stage. Others anonymously accused her of having too much “ambition” and a personality that can “rub people the wrong way”.

For many Democratic women, the backlash was further evidence of the importance of selecting a candidate who demonstrated the vital role of Black women within the party.

“Senator Harris is a fearless champion for justice,” said Adrianne Shropshire, executive director of BlackPac. “She understands the urgency of the moment and will work to restore competent, moral leadership to Washington.”

Harris was elected to the Senate in 2016, becoming only the second black woman ever to serve in the chamber. A fierce critic of the president, Harris drew national attention for her prosecutorial-style inquisitions during Senate committee hearings with Trump administration officials. In one memorable exchange, a flustered Jeff Sessions, then the attorney general, told her: “I’m not able to be rushed this fast – it makes me nervous.”

In choosing Kamala Harris, Biden may have found the anti-Trump

Biden was unusually candid about the selection process, an affair traditionally shrouded in secrecy and intrigue. Having spent eight years serving as vice-president to the nation’s first Black president, Biden recalled the experience fondly and presented their working relationship as a model for what he was looking for in a running mate.

During Zoom meetings with donors and supporters, he would often expand on his search, emphasizing that he wanted someone “simpatico” with his personality and his world view as well as someone who was ready to govern on day one.