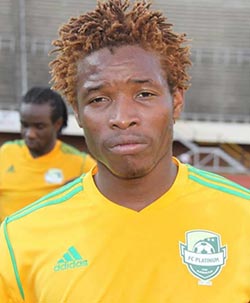 FALLEN former Highlanders and FC Platinum star Joel Ngodzo could resurrect his career at Southern Region Division One side BCC Golden Lions.
Ngodzo was shut out of the Highlanders final 30-man squad after only spending a season following his return from Platinum for indiscipline.
He is the young brother to former Highlanders stars Johannes and Zephaniah.
Signed for a record $60 000 by Platinum four years ago, Ngodzo was tipped to be Zimbabwe’s next brightest star, but after spending three years in Zvishavane, he returned home where his one year stay was dogged by indiscipline.
The 25-year old was given a written warning following a night out boozing during camp ahead of the TM Challenge Cup against Dynamos last year.
Despite his immense talent, corporate backed teams like How Mine and Chicken Inn have stayed away from the player to avoid risking their brand.
Now Golden Lions, owned by the Bulawayo City Council, have come calling, according to sources.
“At 25 he is still young and could be given a chance to play again. He needs to work on his behaviour and fitness a lot,” said a Lions official.
Coach Philani Ncube said he was yet to finalise his 2015 squad but will  certainly do with experienced hands as he attempts to win qualification to the Premier Soccer League at the first attempt.
“We have not finalised the squad, but should anything come up we will let you know,’ Ncube said.Advertisement