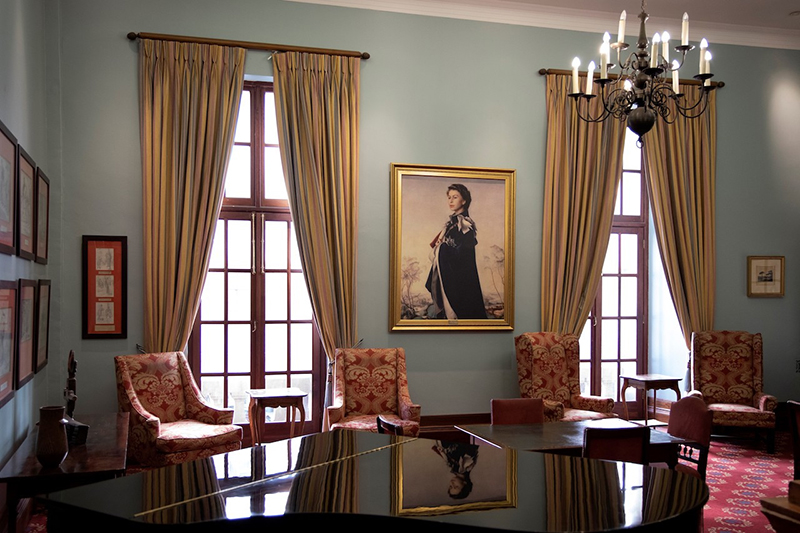 With its imposing columned facade, hunting trophies and oil portraits, the Rand Club in Johannesburg’s city centre is a relic of South Africa’s colonial and apartheid past.

Founded in 1887 by British mining magnate Cecil Rhodes, it was the favoured venue for white businessmen and free-wheeling gold prospectors to strike deals and socialise in the hushed library or at the 31-metre-long (102-feet) teak bar, reputedly the longest in Africa.

But Alicia Thompson, a black woman born in Johannesburg, is seeking to reposition the club, which has struggled to stay open in recent years, by attracting the city’s “young hustlers” of today while preserving its heritage.

Thompson, a 46-year-old beauty business owner who is the club’s deputy chairman, said that she had faced “not one iota of resistance” in her efforts to haul the club into the modern era.

“I grew up in Johannesburg, I frequented the city and I used to see this building that I was not allowed to enter,” said Thompson.

“It was this hallowed, ivory tower and I didn’t know what happened inside. Then I attended a wedding here in 2010, and I couldn’t believe that this gem was withheld from us for all our life.”

Thompson has seen the number of full-time members — paying $720 (632 euros) a year — grow recently to nearly 500 after years of decline, while the numbers of student and absentee members are also up.

“My attitude to members is just to make it your space,” she said.

A life-sized portrait of Rhodes, an imperialist businessman and politician inextricably linked with racism and colonial exploitation, still hangs in a second-floor room.

But the room itself, which previously bore his name, has been renamed the Founders’ Room following an initiative by younger members.

Books from another era bearing the words “kaffir” (an offensive racial slur) and “native” still line the shelves of the library, alongside a fireplace, wingback leather armchairs and a typewriter.

“Some of our history is very unimpressive — but I’m not a ‘fallist’,” said member Lucky Dinake, 24, a black councillor from the main opposition Democratic Alliance party.

“Fallist” refers to supporters of the “Rhodes Must Fall” movement sparked in South Africa in 2015 by students seeking the removal of statues of Rhodes and other colonial symbols from university campuses.

“Our history is our history. Our responsibility is to learn from it, move forward, not to tear it down,” Dinake told AFP.

Outside the library’s tall windows, workers hurried along the roads of the Marshalltown district while minibuses packed with commuters sped past.

Over the years, the club’s fortunes have reflected the mixed fortunes of the surrounding inner-city streets.

Unlike “clublands” in cities like London and New York in upscale neighbourhoods, Johannesburg’s city centre has grappled with businesses fleeing, rampant crime as well as derelict and illegally occupied buildings.

The club is located in Johannesburg’s city centre, which is undergoing a lot of renewal

But work is under way to rehabilitate the area with high-end booksellers opening nearby in recent years as well as investment in public transport and policing.

“The club is becoming a lot more relevant and a lot more accessible to more people, taking advantage of our location. In Joburg, there’s a lot of renewal,” said Dinake.

Alongside efforts to modernise the club and appeal to millennials, including the launch of a business networking club, some rules still honour tradition with phones and tablets banned in the club’s upstairs communal areas.

“The idea is to enjoy each others’ company. It’s good for the ‘personal’ — that’s what’s lacking on places like LinkedIn,” said Thompson.

Jane Germaner, the 33-year-old wife of a member, praised the club’s transformation policy.

“One of the beautiful things about it is you get to network with all these people you wouldn’t necessarily meet in your day-to-day life. You meet all kinds of characters,” she said.

Women were not admitted until 1993 but Germaner said she has never felt unwelcome.

Vestiges of the past like hunting trophies are also displayed less prominently than they once were. A portrait of Nelson Mandela, a member in his lifetime, takes pride of place above the sweeping staircase at the heart of the club.

Conventions like the dress code have been quietly relaxed over time as the club pushes to grow its membership base.

It has also begun hosting weddings, parties and functions which, along with a loan from three members, have put the club on a surer financial footing.

It came close to the brink of closure following a fire in 2005 and it went into “hibernation” in 2015 when its fate again hung in the balance.