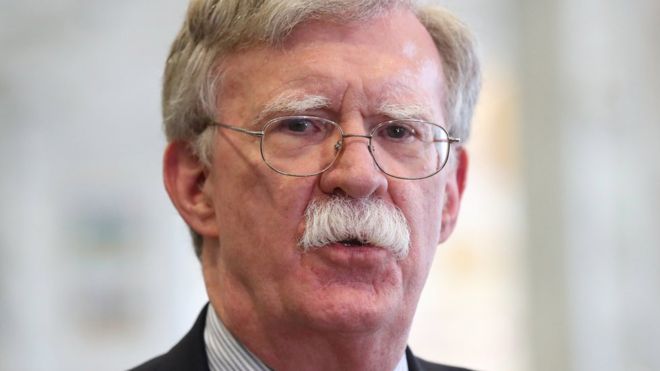 “I informed John Bolton last night that his services are no longer needed at the White House,” he wrote.

“I disagreed strongly with many of his suggestions,” Trump wrote, adding that a new national security adviser would be appointed next week.

The firing comes amid reports of divisions in the Trump cabinet over a cancelled peace plan to invite the Taliban to the US.

White House press secretary Stephanie Grisham told reporters: “[The president] didn’t like a lot of his policies, they disagree.”

In response, Bolton tweeted that he had offered his resignation on Monday night.

According to a White House schedule,  Bolton had been due to host a White House briefing with Secretary of State Mike Pompeo and Treasury Secretary Steven Mnuchin just over two hours before  Trump tweeted that the national security adviser had been fired.

Bolton had opposed peace talks with the Taliban, which  Trump scrapped at the weekend after initially inviting the group to the US to finalise peace talks.

Trump’s invitation to the Taliban drew criticism due their timing, which came near to the anniversary of the 11 September 2001 attacks by Al Qaeda, a terror group that the Taliban had permitted to operate out of Afghanistan.