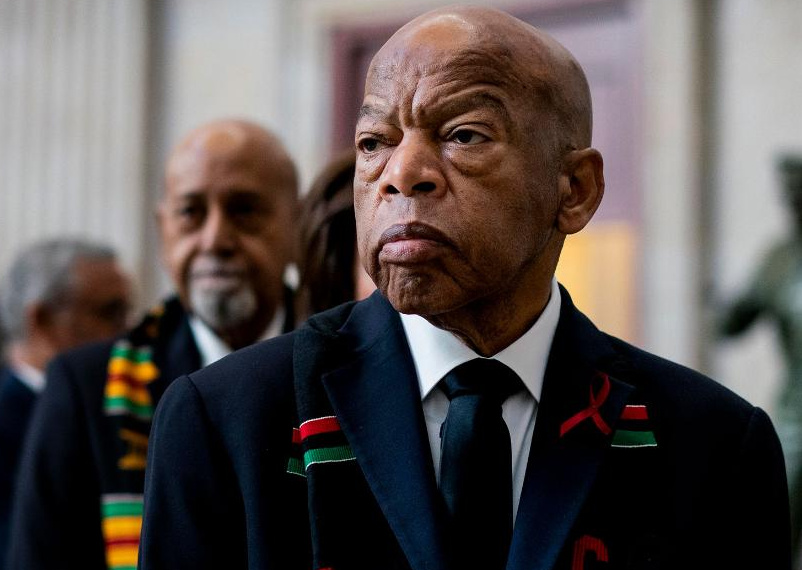 Barack Obama, the first African American president, said Lewis “loved this country so much that he risked his life and his blood so that it might live up to its promise”.

Lewis campaigned for civil rights to the very end of his life. Obama said it was “fitting that the last time John and I shared a public forum was at a virtual town hall with a gathering of young activists who were helping to lead this summer’s demonstrations in the wake of George Floyd’s death”.

Born to sharecroppers in Troy, Alabama, in February 1940, Lewis became a prominent leader of the civil rights movement in the 1960s. He joined the Freedom Rides that began in 1961, traveling to the south by bus to fight segregation on interstate buses.

A founding member of the Student Nonviolent Coordinating Committee, he became its chair in 1963 and helped organise the March on Washington, when Martin Luther King Jr delivered his “I have a dream” speech.

In Selma, Alabama, in 1965, as activists tried to cross the Edmund Pettus bridge, Lewis was walking at the head of the march with his hands tucked in the pockets of his overcoat when he was knocked to the ground and beaten by police. His skull was fractured. Nationally televised images of the brutality forced attention on racial oppression in the south. That incident, along with other beatings during peaceful protests, left Lewis with scars for the rest of his life

Lewis was elected in Georgia’s fifth district in 1987 and held the office until his death. He announced his stage four pancreatic cancer in December last year.

“I have been in some kind of fight – for freedom, equality, basic human rights – for nearly my entire life,” he said. “I have never faced a fight quite like the one I have now.”

The youngest and last survivor of the “Big Six” civil rights activists, a group led by King, when Lewis attended Obama’s inauguration in January 2009 he was the last surviving speaker from the March on Washington. Obama presented him with a commemorative photograph signed, “Because of you, John. Barack Obama.” In 2011 he awarded Lewis the presidential medal of freedom.

On Friday, Obama said: “I first met John when I was in law school, and I told him then that he was one of my heroes. Years later, when I was elected a US senator, I told him that I stood on his shoulders. When I was elected president of the United States, I hugged him on the inauguration stand before I was sworn in and told him I was only there because of the sacrifices he made.

“And through all those years, he never stopped providing wisdom and encouragement to me and Michelle and our family. We will miss him dearly.

“It’s fitting that the last time John and I shared a public forum was at a virtual town hall with a gathering of young activists who were helping to lead this summer’s demonstrations in the wake of George Floyd’s death.

“Afterwards, I spoke to him privately, and he could not have been prouder of their efforts … I told him that all those young people – of every race, from every background and gender and sexual orientation – they were his children. They had learned from his example, even if they didn’t know it.”

Former president Bill Clinton said Lewis “gave all he had to redeem America’s unmet promise of equality and justice for all” and “became the conscience of the nation”.

Former president Jimmy Carter saluted Lewis for making “an indelible mark on history through his quest to make our nation more just”.

Pelosi, who ordered US flags at the Capitol to be flown at half-staff, said: “Every day of John Lewis’s life was dedicated to bringing freedom and justice to all. As he declared 57 years ago during the March on Washington, standing in the shadow of the Lincoln Memorial: ‘Our minds, souls and hearts cannot rest until freedom and justice exist for all the people.’

“How fitting it is that even in the last weeks of his battle with cancer, John summoned the strength to visit the peaceful protests where the newest generation of Americans had poured into the streets to take up the unfinished work of racial justice.”

Joe Biden, the presumptive Democratic nominee for president in a year riven by protest over racial injustice, said: “John’s life reminds us that the most powerful symbol of what it means to be an American is what we do with the time we have to make real the promise of our nation – that we are all created equal and deserve to be treated equally.”

In 2001, Lewis boycotted the inauguration of George W Bush because he did not believe he had fairly been awarded victory over Al Gore. Bush released a statement on Saturday morning, saying Lewis “worked to make our country a more perfect union”.

“America can best honor John’s memory by continuing his journey toward liberty and justice for all,” Bush wrote.

Donald Trump, the current Republican president, was at his golf course in Virginia on Saturday. In a proclamation, he ordered flags at the White House and at all federal buildings, embassies and military installations to be flown at half-staff, “as a mark of respect for [Lewis’s] memory and longstanding public service”.

On Twitter, Trump said he was “saddened to hear the news of civil rights hero John Lewis passing. Melania and I send our prayers to he and his family.”

The most senior Republican in Congress, the Senate majority leader, Mitch McConnell, said Lewis was a “pioneering civil rights leader who put his life on the line to fight racism”.

“Congressman Lewis’ place among the giants of American history was secure before his career in Congress had even begun,” McConnell said. “You did not need to agree with John on many policy details to be awed by his life.”

Late last year, a spokesperson for Lewis said the congressman had been arrested 40 times in the civil rights era and several times since, including in 2013 at a rally for immigration reform.

Even while ill, Lewis continued to speak out, expressing hope that Black Lives Matter protests would lead to real change. In early June, he said that while he had “been down this road before”, this time gave him hope.

Clearly ailing, he appeared to be signaling to a new generation of leaders.

“We’re going to survive and there will be no turning back,” he said.