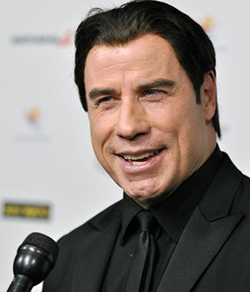 JOHN Travolta has dismissed allegations about his sexuality – saying that they are “every celebrity’s Achilles heel”.
The Hollywood star has faced rumours about his private life for years, including his former pilot claiming he had a romantic relationship with the Pulp Fiction and Saturday Night Fever star.
But the Grease actor dismissed any claims, telling The Daily Beast that they were based on greed.
“This is every celebrity’s Achilles heel. It’s just about people wanting money. That’s all. It happens on many levels,” he said.
“I don’t care that much about it. Other people may attack it back more than I do, but I let all the media stuff go a long time ago because I can’t control it. I think that’s why it persists, to some degree.”
The actor’s son Jett died at the age of just 16 after suffering a seizure during a family holiday in the Bahamas in 2009.
Travolta, who recently promoted his new film The Forger at the Toronto International Film Festival, said he had been disturbed by some of the media coverage of his family tragedy.
“I found it most offensive with the loss of my son. I felt like that was the lowest I’d ever felt. Sex stuff is always going to be interesting to somebody, but you stay away from family. You really should. With that, I always felt like the media – not all of the media, but parts of it – went too low there.”
The actor said he had no career regrets – even making Battlefield Earth, the 2000 film based on Scientology founder L Ron Hubbard’s 1982 novel of the same name.
“No way, are you kidding? Why would I ever regret that? I had the power to do whatever I wanted, and I chose to do a book that I thought was worthy of making into a movie.
“It’s a beautiful film. It’s a good movie. Again, the media angle confused the movie with [Scientology],” he said.Advertisement