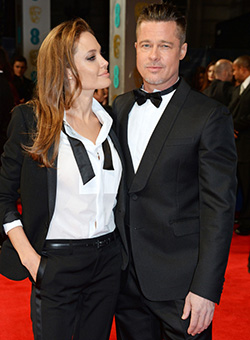 BRAD Pitt and Angelina Jolie, the glamorous Hollywood couple dubbed “Brangelina” in tabloid headlines, were married in France, according to media reports on Thursday.
Pitt, 50, and Jolie, 39, were wed on Saturday in a small chapel in a private ceremony attended by family and friends.
In advance of the nondenominational civil ceremony, Pitt and Jolie also obtained a marriage license from a local California judge. The judge also conducted the ceremony in France.
The couple’s children took part in the wedding.
Jolie walked the aisle with her eldest sons Maddox and Pax. Zahara and Vivienne threw petals. Shiloh and Knox served as ring bearers, the spokesperson says.

Angelina and Brad announced their engagement in April 2013 following an eight-year relationship. At the time, they described it as a “promise for the future” and said they were very happy to be engaged.
The couple will star in an upcoming film “By the Sea,” written and to be directed by Jolie, who will also co-star and co-produce the drama with Pitt.
They last co-starred in 2005’s “Mr. and Mrs. Smith,” which sparked their relationship.
Jolie, who won a best-supporting actress Academy Award in 2000 for “Girl, Interrupted,” and Pitt, who co-produced the Oscar-winning “12 Years a Slave,” are two of Hollywood’s biggest names.
They also are known for their humanitarian work with Jolie serving as a goodwill ambassador for the U.N. High Commissioner for Refugees and Pitt starting a foundation to help restore New Orleans after Hurricane Katrina.
Jolie was previously married to actors Jonny Lee Miller and Billy Bob Thornton and Pitt is divorced from actress Jennifer Aniston.
In May 2012, Pitt told reporters in France at the Cannes film festival that he and Jolie supported same-sex marriage and hoped it would be accepted throughout the United States before they set a wedding date.Advertisement