Moyo confirmed Thursday that he and Zhuwao supported and financed Chamisa’s campaign.

“It’s an open secret that my TL (Time Line) in these streets actively supported @nelsonchamisa’s candidature in 2018. No regrets or apologies. On the media campaign you cite, I got other comrades to also give their support. For example, @PatrickZhuwao paid USD 6K for radio ads on @ZiFMStereo,” Moyo wrote on Twitter Thursday. 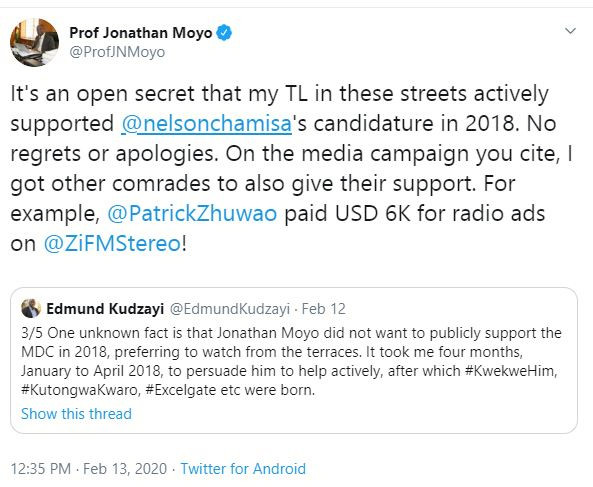 Zhuwao is a nephew to the late President Robert Mugabe. He and Kasukuwere are now in self-imposed exile in South Africa while Moyo is holed up in Kenya. On the eve of the 2018 election, Mugabe declared open support for Chamisa.

“As far as I know, we never worked with Jonathan. I don’t think it’s true. In my entire experience with the MDC, we never talk about Jonathan Moyo. So I’m actually surprised,” Molokele said.

Moyo was once Information Minister who mounted a fierce propaganda campaign for Mugabe when the former strongman fell out of favour with western allies for embarking on a violent land reform exercise from the turn of the century.