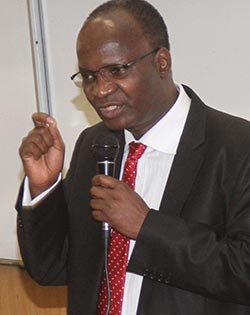 EXILED former Higher Education minister Jonathan Moyo joined millions of Zimbabweans in an outpouring of grief following the death of MDC-T leader and former Prime Minister Morgan Tsvangirai.
Moyo took to Twitter to pay homage to the man he ridiculed at every turn during his time as a senior Zanu PF member and Cabinet minister.
“A people’s hero inspires supporters & challenges detractors to make a better society. As such a hero #MorganTsvangirai enabled deeply divided Zimbabweans to see the link and difference between hard won #independence and #democracy, based on free, fair and credible elections RIP Save (Tsvangirai’s clan name),” said Moyo on twitter.
Some Zimbabweans were however quick to remind Moyo of his former disregard for the late MDC-T leader;

Witchcraft is not flying at night ,naked on a broomstick . This is modern day digital witchcraft .  Jonso Please live Morgan's name out of your tweets— mADE iN thE 80's (@iam_ven12) February 15, 2018

This is low even for you Mr https://t.co/xuXfyptSlo were a large part of the reason this man suffered extreme hardship in life and yet today u stand here and call him a hero,in pursuit of relevance for yourself..Unganya— Tyron Maroney (@Mar0ney) February 15, 2018

The former ruling party politician was jettisoned out of Zanu PF in the wake of the military coup in November last year that paved the way for current President Emmerson Mnangagwa to take over power from former President Robert Mugabe.Advertisement

Moyo had been part of a faction of Zanu PF known as G40 which fought and lost an acrimonious internal struggle for Mugabe’s throne with Mnangagwa’s Team Lacoste.
The acerbic Moyo at some point characterised Tsvangirai as a “puppet” in in reference to reports of the former MDC-T leader’s alleged sex scandals added: “Tsvangirai has an open zip and shut mind policy”.
When cornered about the lack of delivery of promised 2 million jobs by Zanu PF by his followers on Twitter, Moyo ranted: “Keep your puppet Tsvangirai & yes you will get the 2 million jobs on top of that!”
Following the consummation of the coalition government in 2009, Tsvangirai visited western capitals seeking support for the new government and stabilization of Zimbabwe’s economy.
In 2012 following Tsvangirai’s visit to the US, Moyo said the late opposition leader had “embarrassed the country and appeared as a supplicant”.