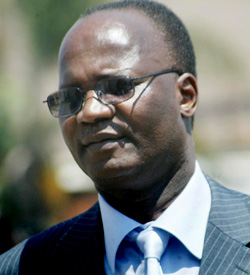 PROFESSOR Jonathan Moyo’s tiff with the national newspapers, both the Herald and Sunday Mail over their reportage of his recent lampooning of the Government’s Command Agriculture programme through social media, is not only baffling but also defines who he really is; a chameleonic character and a political charlatan, whose manipulative instincts and duplicitous machinations exposes his real persona.
Professor Moyo should be the last person to complain about state media capture and inaccurate coverage of events by the national newspapers. The real capture of state media, which he now grimaces about, was actually the hallmark of his administration, when he was the Information Minister, a few years back.
During his tenure as Information Minister, disinformation and deliberate twisting of facts was the order of the day, to such an extent that even Joseph Goebbels, Hitler’s notorious propaganda minister, would have chuckled with envy. Scars inflicted on a traumatised nation, caused by Moyo’s vindictiveness during his tenure, are still visible to this day. His vicious assault of the democratic movement will remain lingering in the minds of many Zimbabweans for a very long time to come.
So when he, unsolicited, raises his whimsical voice of dissent, ostensibly over a myriad of issues amongst them, the ideological shortcomings of the command agriculture programme, misinformation and the capture of the state media by successionists, we have every reason to be circumspect about his real motive, given his insatiable appetite for abusing every available platform for his glory seeking endeavours.
Zimbabweans are cognisant of the fact that Command Agriculture is a Government sanctioned programme, approved by Cabinet of which he (Moyo) is a key member. Strangely and unashamedly, his name is said to appear on the list of beneficiaries of the very programme he now condemns. At the inception of the programme, he did not have the guts to raise the misgivings he now complains about for whatever reason.
And true to his chameleonic character, he refers to the command agriculture programme as oxymoron (a figure of speech which combines two apparently contradictory terms) and a non-starter. Professor Moyo is alive to the obvious fact that the command agriculture programme imbeds in its structure, features of the two opposing economic models; i.e. the capitalist and the command.Advertisement

A closer examination of the programme however, shows a clear dominance of capitalist features in the programme as opposed to those of the command. But because he is intent on dismissing the entire command programme on perceived economic model leanings, he chooses to believe the opposite.
But Moyo will not fool anyone even by indulging in his familiar circumlocutory spin, in order to hide both his real motive and the intended target of attack. We certainly know that the attack is not directed at the command or state media; but the man he loathes and the man who is at the helm of the command agriculture programme; Vice President Emmerson Mnangagwa.
It is his (Moyo’s) fervent wish that the programme fails; lest it gives Mnangagwa political mileage. And to confirm the folly and sterility of his desperate shenanigans, he   even attacks the title of the programme and goes further to provide what he considers the appropriate technical name of the programme. But what is in a name, will this change the spirit, thrust, content and the scope of the command programme?
Professor Moyo’s further claims that banks were commandeered by the government to pump millions of dollars into the programme are astoundingly baseless. Government has over the years failed to convince the same banks to fund a similar programme under the 99-year lease guarantee, which in ZANU PF language, is more indigenous and patriotic than the command. How then does the government commandeer banks to fund a programme which, according to Moyo, is a non-starter? Is it not common knowledge that banks are risk averse and will fund only projects that are bankable?
It is evident that Moyo’s emotionally charged instalments are an extension of the unending factional wars in ZANU PF, which he appears to be badly losing, and now seeks to win the sympathy of the nation by providing as evidence, cooked up statistics of the anticipated yield.
His duplicitous mumblings about a bumper harvest, purportedly expected from the Presidential input scheme, are an incredulous attempt by a desperate minister, to sing loudly for his supper before the President. How else are we expected to follow through a disjointed and splattered presentation, from an angry minister who is only able to critique command agriculture, while he cannot do the same to a similar Presidential input scheme, which is equally funded from the same source of the commandeered finances?
While it is possible that command agriculture could be a monumental disaster, it is equally strange that the most lethal criticism of the programme should come from Moyo, one of the key designers of the programme. As already alluded to, Moyo is either insincere with his criticism or is just politicking for expedience.
Professor Moyo should desist from harassing journalists. Instead, he should reserve his time to explaining to Zimbabweans what became of the two million jobs promised by his Party in 2013 and how successful Zim- Asset, his perceived brain child has been?