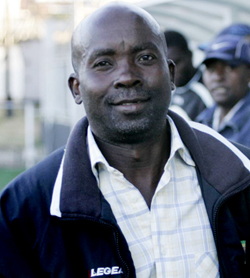 FORMER Caps United coach Maxwell Takaendesa Jongwe has been installed as the new ZIFA technical director, taking over from Nelson Matongorere.
Matongerere was relieved of his position after being found guilty of improper conduct when he voted in the Fifa World Coach and Player of the Year awards in 2012.
Although Zifa chief executive, Jonathan Mashingaidze was not at liberty to confirm the development, it has since emerged Takaendesa attended the induction for the Zifa secretariat at Zifa village on Tuesday.
The former Monomotapa and CAPS United coach had a tag which read: “Zimbabwe Football Association: Mr M. Takaendesa: Technical Director”.
“I can confirm that the Zimbabwe Football Association will be having a substantive technical director and the name will be made public after May 1st,” Mashingaidze said.
“In terms of criteria, we were guided by Fifa in terms of selecting the person and we looked at the technical skills, the academic qualifications, the football-related experience and above all the ability to interact with Fifa, Caf and Cosafa in planning and reporting.
“The nation shall be informed of the new technical director as of May the 1st.”Advertisement