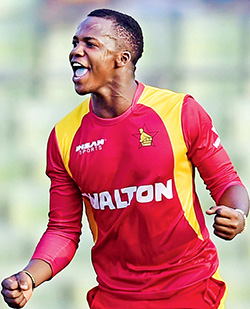 ALL-ROUNDER Luke Jongwe fully recovered ahead of India series after being struck by a ball earlier this year
Zimbabwe allrounder Luke Jongwe is in line to take on India after recovering from a head injury suffered during his country’s preparations for the ICC World T20 in February.
Zimbabwe, who are set to host India in a series of limited-overs matches next month, confirmed last week they would have a fully fit squad to choose from for the three ODIs and three T20s, to be played from June 8-23.
“The national selection panel will be happy that players who have been on the rehabilitation list are now available for selection for the home series against India,” a statement from Zimbabwe Cricket said.
“(Jongwe) has been under close monitoring for any reactive neurological signs and symptoms during the camp.
“He has managed to do his daily fitness drills and bowled and batted during the practice matches.”
Jongwe suffered the injury during a practice match at the Sharjah Cricket Ground in the United Arab Emirates in February.
While attempting a return catch, Jongwe missed the ball and it hit him above the right eye.
He was taken by ambulance to hospital where an x-ray revealed no damage.
However, as a precautionary measure, he also underwent a magnetic resonance imaging scan, was put on a drip and hospitalised for observation.
Zimbabwe Cricket also confirmed leg-spinner Graeme Cremer had recovered from a fracture to his left hand, with senior national team physiotherapist Anesu Mupotaringa saying the Zimbabwe vice-captain had made “very good progress” from the injury, which prevented him taking part in the World T20.
Pace bowler Tinashe Panyangara, who had a lower backache complaint, will also be available for selection, as will batsman Chamunorwa Chibhabha, who was hit on the left arm during a net session earlier this month.
Zimbabwe failed to reach the ‘Super 10’ phase of the World T20 in India, with Afghanistan advancing ahead of the African nation in the qualification round of the tournament.
Currently ranked 11th on the ODI charts and 12th on the T20 table, Zimbabwe will also be eager to upset their higher ranked subcontinent opponents to climb back into the top 10.Advertisement